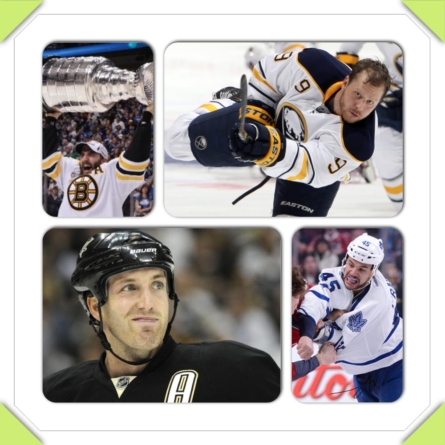 Here is your latest dose of Fantasy Hockey insight as heard on the 04/13/13 edition of PensWeek! This week we look at some players who can help you get an edge on the competition in some very specific categories. Some of these categories are often overlooked by owners, especially when it comes down to the waning days of fantasy playoff match-ups!

It seems like the NHL season just got underway, but we are nearing its conclusion. Most teams have less than 10 games remaining on their schedules and that means that the fantasy playoffs are either underway or beginning soon in your league. In the playoffs every category is magnified, suddenly a player who specializes in winning faceoffs or logs a ton of hits can mean the difference between winning not only a category, but a match. This week we are going to point out some players who specialize in not only a category, but in helping you win.

Bryan Little is a very talented player, though he has some inconsistencies in his game. One thing that he does very well is win faceoffs. He ranks 19th in the league in faceoffs won and can really bolster that category for you. He has won 32 draws in his last four games and also chips in a bit in other offensive categories such as goals and assists. He has six points in his last three games.

When looking for hits, it would be great to pick up someone like the Isles Matt Martin, who leads the league in that category, though that isn’t easy for all rosters since he doesn’t bring much in the way of offensive punch. Steve Ott on the other hand is third in the league in the category and contributes in a number of different ways. He has a modest three points in his last five games but has also won 43 faceoffs over that span. Great depth pick up to offset evenings when more reliable performers aren’t playing. For a guy who is owned in just 45 percent of leagues, he could pay some nice dividends heading down the stretch!

Two options that can really help you in that category while still helping in other categories:

Brooks Orpik – Penguins – 107 blocked shots – owned in just 13 percent of YAHOO leagues. His plus-16 is also going to be a big help for you down stretch. He is on the ice for more goals for than folks realize. He also has Eight points of his own, he very easily could get his ninth or 10th over the next couple weeks. Who knows, that extra point could be the one that clinches victory for your team!

Mark Fraser – Maple Leafs – Fraser skates a regular shift with Cody Franson and is sort of the defensive presence on the pairing. He has 80 blocked shots on the season, good for 18th most in the league. Fraser can also bolster hits with 125 and is a boon for plus-minus with a plus-15 on the season.

Bergeron, who recently suffered a concussion, but is on the comeback trail is tied for fourth in plus-minus with a plus-23. He is with the Bruins on their current trip and could play very soon. Owners have abandoned ship on him due to the injury and he could be sitting there waiting for you on the waiver wire. He will also add to your faceoff win totals, assists and special teams points.

One last name to consider this week —- ERIK KARLSSON

That is right, Karlsson is skating again and looks great! It was expected that he would not be back in the line-up for the Senators again this season, but the fact that he is on ice and looks just as good as he did prior to his injury leads us to believe that there is a chance that he could make his way back during the playoffs. In a perfect world he may actually even appear in a game of two prior to the end of the season, which woudl be a boon for fantasy owners. Injuries scare people off during single season leagues and he very well might have been dropped… try to find and stash him just in case. That kind of defensive production is not available on waivers all that often.