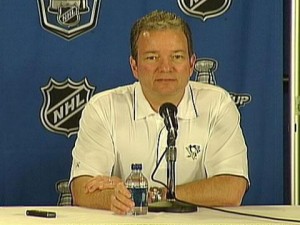 As you know, our pal George Von Benko sits down for a series of one-on-one interviews with Penguins’ general manager Ray Shero each season for his radio show. They tend to fall into place as such: pre-season, trade deadline and right before the post season begins.

If you are a regular reader of this blog, you have likely listened to many of these past pow wows. Hopefully you have found them as enlightening as I do.

George got together with Ray last week for his annual pre-playoff sit down and got him talking about a variety of things. Here are just some of the topics that the two kicked around when they met during the first intermission of the Penguins/Rangers game last Thursday…

Overall it was another great chat between George and Ray Shero. There is a bit of background noise, as the interview took place in Shero’s box.

There is a ton of info within, hope that you enjoy it!

***George Von Benko, is a successful author and broadcaster who has been a fixture in the Pittsburgh sports scene for decades. He recently penned the book “Memory Lane” (full description below), is working on two additional books, and hosts “Sportsline” weekly on 590 AM WMBS on Saturday’s from 10:15am EST to 12:00pm EST. George also does a ton of work covering the Pittsburgh Pirates and you can follow along with stories and interviews over at pirates.scout.com/.

Through the years Western Pennsylvania athletes have always ranked among the nation’s elite and most productive. George Von Benko has been a first hand observer for close to 50 years and his Memory Lane recounts the accomplishments and honors they have earned. It includes baseball Major Leaguers, collegiate football and basketball All Americans, NFL and NBA stars, olympians, legendary coaches on both the scholastic and collegiate scene and national figures like Sandy Stephens, Ernie Davis, Johnny Lujack and Vivian Stringer.