Ryan Porth wonders what he would do if given the chance to be the NHL Commish for one day. 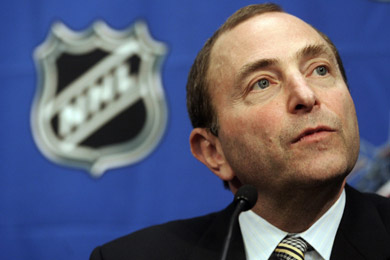 In this past weekend’s series of interviews at RLD Hockey I had with fellow bloggers, one question I threw out there to each of them was ‘If you were commish for a day, and had to change one thing, what would it be?’ That got me to thinking what I would do if I were in Gary Bettman’s shoes for a day? Here are three things that I would change if I ever had that opportunity.

1. Change the points system
If you’ve followed my work at RLD Hockey before, you already understand my feelings on this subject. If the NHL is so dead-set on having the overtime loser acquire a point, teams need to be rewarded more for taking care of a win in regulation.

In this previous post, we took a glance at the possibility of giving three points for a regulation win, two for an overtime win, and one for an overtime loss. As you can see, this year’s playoff picture would have been altered; with ten more regulation victories than Montreal, the Rangers would have made the postseason over the eighth-seeded Habs.

Yes, the record for points in a season would be shattered if the NHL went to this system, but it’s for the better in my opinion. This eliminates all of the extra point crap when a game goes to overtime, and rewards teams for getting the job done in 60 minutes. It would create more excitement in the final two minutes of regulation of a tied game!

2. Eliminate the long-term, front-loaded contracts
I understand Mr. Bettman does not have the final say on this, and the NHLPA would have to agree to it in the next CBA. However, Bettman does have a lot of power in the NHL. If I had that same power, I would try to put a limit on long-term deals (seven or eight years maximum).

I’d also put a stop to the cap circumvention that has taken place too often in recent years; possibly have a limit of $2 million between the first and last years of the contract? The salary cap was supposed to result in more competitive balance throughout the league… and we saw that initially after the lockout when Paul Kariya (NSH), Adam Foote (CBJ), and Scott Niedermayer (ANA) all settled for small-market clubs.

But the cap has risen each year, enabling the big-market teams to absorb all of the top talent in the free agent pool – specifically with the front-loaded contracts. One example that sticks out like a sore thumb is when Buffalo lost out on re-signing Danny Briere when Philadelphia was able to offer him more money in the earlier years of the contract. Also, just one of these said contracts has been given out by a small-market club (Lecavalier, Tampa Bay).

It only makes sense to eliminate the ridiculous long-term deals (like Ilya Kovalchuk’s and Marian Hossa’s, etc) that tend to favor the big-market teams.

3. Move up everything on the schedule
I have to give ESPN’s Pierre LeBrun a nod on this one, as his post in mid-July persuaded me on this topic.

Why don’t we move the entire league schedule up a week or two? For example, if you move up the start of the regular season by nine days, you’d have opening puck-drop on September 28. By doing this, you avoid opening night/weekend being overlapped by football and the MLB playoffs, and it gets its own stage.

As a result, the Stanley Cup will be won on or shortly after Memorial Day weekend, and the off-season events (draft, free agent frenzy, etc) will be pulled further away from holidays on July 1 (Canada Day) and July 4 (Independence Day)… which you know would make general managers, agents, and players happy.

Subsequent to all of this, why not hold the All-Star Game a couple days after the New Year at the site of the Winter Classic? I know the league likes to move the ASG from city-to-city and arena-to-arena, but they already do just that annually with the draft.

The ASG is already a meaningless game, so putting it outdoors adds a little bit of intrigue. Players from Carolina, Nashville, Tampa Bay, etc. – teams that may never get their shot in the Winter Classic – would enjoy getting a chance to play outdoors. The game is all about the fans and players having fun, right? I think the majority of both parties would welcome this. Plus, it’s around the time of the 41-game mark for most teams, instead of 45-50 like it is when the game is played in late January.

If I ever get my one day as commissioner – which has less chance of happening than me getting into Harvard! – I would change these three things as all would enhance the NHL (they wouldn’t hurt the league, at least).

What would you do if you were commish for a day?