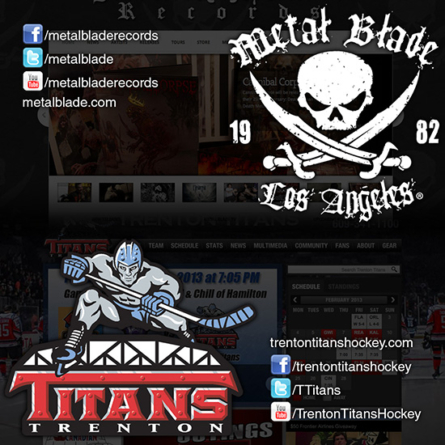 Anyone who is familiar with me, the owner, operator, editor, lord and ruler of this website pretty much has a handle on the fact that From the Point is as much a place for music – specifically metal – as it is hockey.

Dr. Egon Spengler was once quoted as saying, “Don’t cross the streams,” but as we saw by the time ‘Ghostbusters’ ended, crossing the streams sometimes yields awesome results and that was the case back on Feb. 11, 2013 when Metal Blade Records joined forces with the Trenton Titans of the ECHL.

According to a joint press release from the entities, they will partner for a number of cross-promotions over the coming months, “primarily through each company’s vast array of social networks.”

It is a match made in metal heaven if you ask me. Though some arenas are moving in a slightly different direction, metal is still a huge part of the live hockey experience. It is a pretty rare evening in a hockey rink that you don’t hear Metallica, Motorhead, and in Pittsburgh, sometimes even Dimmu Borgir!

It is also worth noting that Slagel, who has discovered and promoted hundreds of amazing bands, gave the aforementioned Metallica their first big break by including the track “Hit the Lights” on his first compilation, ‘Metal Massacre.’

Slagel, who is a huge hockey (and yes, Pittsburgh Penguins) fan, also joined forces with NHL.com’s Shawn Roarke back in 2011 to launch a unique radio show/podcast entitled ‘Metal Misconduct.’ It is a perfect pairing, as Roarke is a huge metal head and Slagel loves the game. They bring together major players from the sporting world and the music industry who share a passion for both Metal and Hockey. Previous guests on the show include Sabres’ F Drew Stafford, Sharks’ D Dan Boyle and MMA star Josh Barnett. 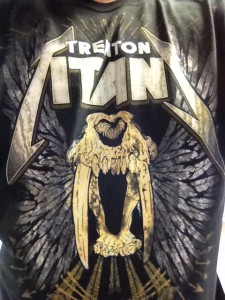 The Titans, who are an affiliate of the Philadelphia Flyers, will soon have a new t-shirt design and Slagel shared it on his instagram this afternoon and passed the original on to me this evening.

The logo is a bit reminiscent of something, but I can’t quite place it – maybe some of you can. Ha

The partnership is a great one for fans of both of the products as it should further spread the gospel of hockey and metal. I look forward to seeing what each has up their sleeves moving forward.

You can find out more about the Trenton Titans by clicking HERE.

You can find out more about Metal Blade Records by clicking HERE.

Here is the official release:

Los Angeles-based Metal Blade Records, who recently celebrated their 30th anniversary in 2012, have partnered with the Trenton Titans declare them as metal’s official hockey team. The two brands will be launching various cross-promotions over the next few months, primarily through both company’s array of social networks. The Trenton Titans play in the ECHL the premier “AA” hockey league and are the proud affiliate to the Philadelphia Flyers in the NHL and the Adirondack Phantoms in the AHL.

The Trenton Titans host a weekly Google+ and YouTube live video feed. On the show, Titans GM Rich Lisk discusses the latest games, player moves, promotions, a top 10 related to current events in Titans Nation and a question and answer segment. Previous broadcasts are available on the Trenton TitansYouTube channel. The Trenton Titans are about halfway through their regular season as part of theECHL’s Eastern Atlantic divison, with the remaining schedule available on trentontitanshockey.com. Fans can follow the team there, as well as via their other social outlets at: twitter.com/TTitans,facebook.com/trentontitanshockey.