Amber Alexander tries to answer the question: Can the NHL overtake other sports in America? 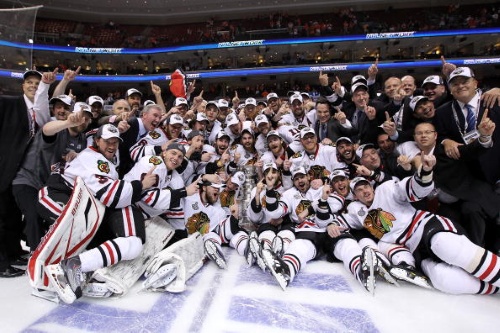 You have controversy surrounding Big Ben in Pittsburgh, following the accusations of sexual abuse from a 20 year old.

Lebron James shocked everyone by going on national television to announce his signing to Miami Heat, leaving his home state of Ohio.

Cristiano Ronaldo is now a father to a baby whose mother is a waitress.

Countless accounts of steroid use by MLB players across the league have made it a joke to many.

So where does that leave hockey?

Hockey is the only sport you don’t hear hard accusations of players using illegal substances or having feuds with their teammates.

The steroid case in Washington, linking some Capital players, was probably the worse thing to happen this year in terms of illegal activities. That was later dropped and players who were questioned were cleared.

NHL ratings soared this year and it started when the Olympics were completed.
The year started off with the Olympics in Canada, and what an event that was.

The first United States vs. Canada game drew in 8.22 million viewers all together, making it the 2nd highest program of all time. Not surprisingly Pittsburgh drew the highest number of viewers, doubling the national average.

After the Olympics, hockey in the United States grew drew more and more audiences. People who watched the gold medal game saw what many hockey fans already knew: this sport is different from all others.

Hockey players have been praised as some of the kindest in all of pro sports and some of the most giving. It’s no surprise hockey has been given so much praise from fan bases around the league.

This sport is growing and the $2 million raise in the salary cap shows that.

TV ratings for NBC have gone up and the many rivalries across the NHL are producing more and more fans. For the Penguins, you have two of the biggest in the game with Philadelphia and Washington.

Gary Bettman knows this and is putting one of them on display in this year’s Bridgestone NHL Winter Classic — Penguins vs. Capitals. It will be exciting to say the least.

These exciting match-ups are putting hockey in position to compete with other sports.

This year’s Stanley Cup playoffs are just an example of what this sport can do. It went head to head with the NBA finals and even produced higher ratings on some nights.

In the U.S, football, basketball and baseball are the sports you commonly see as the most viewed, but hockey is being watched by more Americans every week.

I’m one of those who has to watch hockey games on NHL Game Center online because I can’t see them on TV unless Versus or NBC covers them. That needs to change. Hockey needs to branch out more which would put it in a position to compete with the other big sports.

As long as the NHL and NHLPA can keep their CBA level, hockey will become a mainstay sport.

No controversy in hockey makes fans gravitate towards it.

This year will be exciting and as a Penguin fan, it will be one to remember for a long time.

***Amber is a hockey fan from the deep south. She prefers a Penguins match-up over any College Football game and enjoys writing about hockey in general. A Journalism major, Amber is a news reporter for her local newspaper. You can follow her on twitter here.