Though Michel Therrien is still receiving a paycheck from the Pittsburgh Penguins, he has long wanted to get back behind an NHL bench. He may be close to doing just that with a rival of his former team. 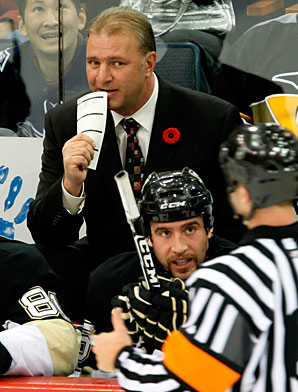 Michel Therrien is still being paid by the Pittsburgh Penguins, but he is not the type who is satisfied sitting around collecting a check for nothing. He has made it known time and again that he was anxious to get back behind an NHL bench and it seems that he may be close to doing just that. His name has come up in regard to several openings in the league and he surfaced as one of three candidates for the New Jersey Devils job last week.

“I’m looking for a challenge,” Therrien told Ron Cook of the Pittsburgh Post Gazette last month. “If there’s an opportunity out there for me, I’m sure I won’t disappoint people.”

The New Jersey job could be just that and according to several Internet reports that have been floating around throughout the day he may just get a chance to give things a go in Newark.

When I first heard talk of his possibly heading to New Jersey this afternoon, I was unable to get confirmation from anyone. However, I have since talked to one source on the New Jersey side who answered, “I think so based on what I heard” when I asked “Is the Therrien thing imminent?”

There apparently are several moving pieces surrounding this deal. It will be very interesting to see how they all come together, how they effect Ilya Kovalchuk and the rest of the off-season decisions that Lou Lamoriello must make.

I can’t confirm this one way or the other 100%, but I figured I would pass it along since so many of you have been asking about it. It is also worth noting that two NHL sources I talked to earlier had yet to hear anything about the Devils having made a coaching decision.