The majority of people around the game of hockey stress the importance of goaltending… and rightfully so. The last line of defense can carry you through tough times during the season, and also make or break your playoff chances. But how important is it to have ‘the guy’ between the pipes? 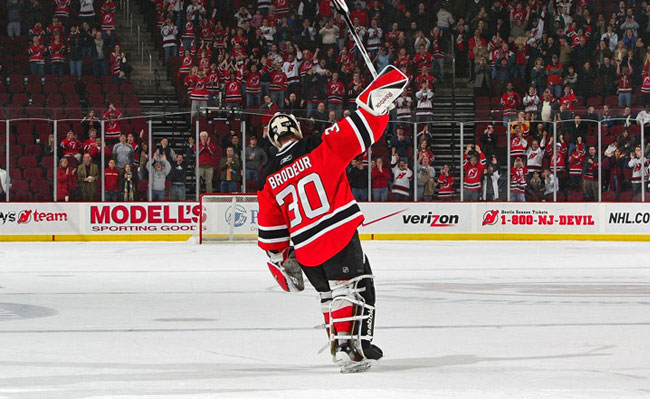 The majority of people around the game of hockey stress the importance of goaltending… and rightfully so.  The last line of defense can carry you through tough times during the season, and also make or break your playoff chances.  But how important is it to have ‘the guy’ between the pipes?

Looking at the top 15 paid goaltenders this season (basically the top half of the league’s 30 starters), only one reached the conference finals: Evgeni Nabokov.  Two of the final four remaining goalies weren’t starters at the beginning of the year: Jaroslav Halak and Antti Niemi.  Lastly, you have journeyman backup, Michael Leighton, who was claimed off waivers by the Flyers.

Here’s the list of top 15 paid goalies this season:

Back-tracking to last year, this was the case as well.  Nikolai Khabibulin made upwards of $6 million in Chicago – the fourth-most out of goaltenders in 2008/09.  In the conference finals, the other three netminders were Marc-Andre Fleury, Chris Osgood, and Cam Ward… none of whom were in the top 15.  The same goes for the 2008 postseason (Turco).

By no means am I downgrading the effect goaltending has, and how vital it is (Jaroslav Halak proved that all postseason long).  But is it so important to invest a fortune in one netminder?  Luongo is going to be making $10 million next year… $10 million!  And the rate for goaltenders seems to be going up; even Halak, who’s currently making less than seven figures, will be getting a hefty pay raise with his stellar postseason performance.

As that rate increases for goalies, it appears as though the significance of having a superstar in net for the playoffs is diminishing.  Before the lockout (and even the couple years following), it seemed like you’d always see the best ‘tenders still around late in the playoffs – whether it was Patrick Roy, Dominik Hasek, Ed Belfour, or even a younger Brodeur.

Nowadays, all you really need in the ‘second season’ is a hot goaltender.  If your $6 million-man between the pipes isn’t on his A-game, he could easily end up falling short to some rookie on fire.  Yes, this was the case at times before the lockout, but it’s more pronounced now.

These playoffs have been Exhibit A, with Brian Boucher beating Brodeur, Antti Niemi topping Luongo, and Tuukka Rask out-dueling Miller.

This very well could be a product of the salary cap.  Teams are spending so much coin on the goaltending that they may not be able to afford a quality backup or enough depth up front or on the blueline.  Most of the star goaltenders don’t have enough of a supporting cast to ultimately win a Cup.

It’s why I think the Capitals are better off next year without bringing Theodore back.  The young tandem of Semyon Varlamov and Michal Neuvirth can certainly put them in a similar position next season at the end of 82 games.  The two shouldn’t cost more than $1.5 million combined, leaving the team more cap room to lock up the core guys and improve the weak points (ahem, defense).

We all know how important goaltending is in the NHL… but the need to have one of the top goaltenders may be a bit over-exaggerated.  As this time of year usually proves us, a hot goaltender (and a solid supporting cast) is all you need to advance deep into the playoffs.