At the beginning of the 2006 Stanley Cup Playoffs, the Carolina Hurricanes faced an 0-2 first round deficit to the 7th-seeded Montreal Canadiens. Martin Gerber was dreadful in the first two games, as the ‘Canes lost 6-1 and 6-5, respectively. 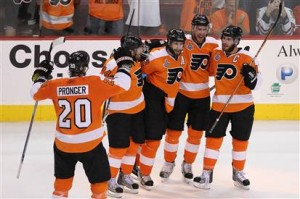 At the beginning of the 2006 Stanley Cup Playoffs, the Carolina Hurricanes faced an 0-2 first round deficit to the 7th-seeded Montreal Canadiens.  Martin Gerber was dreadful in the first two games, as the ‘Canes lost 6-1 and 6-5, respectively.

Without having a goaltender that could stop the puck for their life in those two games, how was the number two seed Hurricanes – one of the best teams all year long – going to battle back from that early deficit?  Well, in came Cam Ward, and the rest was history!  Those Hurricanes went on to skate the Cup after taking Game 7 in the final over Edmonton.

That Carolina team was just one of many to battle through adversity on their way to glory in recent years.

Pittsburgh went through a coaching change in the middle of last year (mid-February, no less) and took a pair of Game 7’s on the road to win the Cup.

The 2008 Red Wings were forced to change goaltenders in round one – from Hasek to Osgood – in what was their toughest series (versus Nashville) before lifting Lord Stanley.

Three years ago, Anaheim had to play crucial Game 4’s in the last two rounds without Chris Pronger, due to two separate one-game suspensions.  They won both, which were defining wins on their path to the title.

Even if you look back earlier in the decade, the 2004 Lightning and 2001 Avalanche had to battle back from 3-2 deficits in the final to ultimately win the title… which brings us to the present-day Philadelphia Flyers (who face the same challenge).

Peter Laviolette has been here before; in fact, he was the bench boss for those aforementioned Hurricanes in 2006.  He took over in Philadelphia back in December, and it wasn’t a pretty start.  At one point they were next-to-last in the Eastern Conference.  But Laviolette’s Flyers never gave up, and had to ride waiver-wire pickup Michael Leighton back into contention.  Then the hockey gods threw another curveball at this team.

Leighton left a mid-March game in Nashville with a high ankle sprain, and was replaced by the Waterboy… err, Brian Boucher.  Nearly everyone ruled them out for the playoffs; but it was he who led the Flyers into the playoffs via a shootout in game number 82.  Since then, they’ve overcome an 0-3 deficit in the second round and another goalie change along the way.

The Flyers are 5-0 when facing elimination (if you include the final game of the season).  Even though the Blackhawks have yet to face elimination, it’d be unfair to say they haven’t faced adversity.

By no means does it compare to what Philadelphia has gone through, but in rounds one and two, they were virtually on the ropes.  Nashville had figured them out and possessed a 2-1 series advantage.  They also held a 4-3 lead in Game 5… I won’t go any further.

Vancouver also had the ‘Hawks sweating early in the series, holding a 3rd period lead in Game 2 (with a 1-0 series lead).  Chicago stormed back to win that game and series.

Also, let’s not forget about them overcoming the pressure laid upon them.  Back in October, the expectation in Chicago was ‘Cup or bust’ – and remains so.  We saw Washington and San Jose fall victim to that this postseason, but the ‘Hawks are still standing.

Getting back to the Flyers; no one should count this team out because of what transpired in Game 5.  They have been though too much to go down without a fight tomorrow night.  Expect them to come out of the gates like gangbusters – similar to what Chicago did on Sunday.

In the last four times that a Cup final series was tied at two, the Game 5 winner has actually lost in three of those instances.  That should give a little more hope to a Flyers club that doesn’t get rattled by anything.

If Laviolette can recapture some of that magic circa 2006 for the up-teenth time this postseason, there is no reason to believe the resilient Flyers can’t come back and win this series.  Of course, Chicago stands in their way.  Philly will have to overcome another obstacle to end their Cup drought of 35 years.