I have long wanted to start a fantasy hockey column as part of my blog and it just didn’t work out for one reason or another. Now that From the Point has launched, it seems like the right time to get it started again. 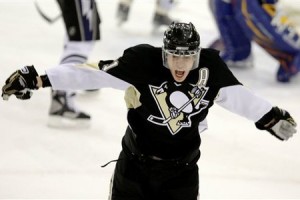 I have long wanted to start a fantasy hockey column as part of my blog and it just didn’t work out for one reason or another. Now that From the Point has launched, it seems like the right time to get it started again.

Those of you that know me, realize that I have long been a fantasy geek. I love it…the deeper the league the better. I love leagues in which drafts picks, prospects and lesser lights are in play. It adds a whole new dimension. I started a very deep keeper league with 15 of my readers from HB and it is quite possible that we can do the same thing here. Time will tell.

My plan for this column is to take a weekly look at the top three fantasy performers from each position, as well as giving you some option that could be out there on your waiver wire that could help your roster down the stretch and in the playoffs.

So with that let’s get started…

Top Three Centers of the Week:

Stamkos has blossomed during his second season in the league and has become one of the top up and comers in the league. He is money on the power play, has great vision and an amazing goal scoring touch. He is single handedly helping to bring the Lightning back. His totals during the past week place him at the top of the centers list: 4 goals, 3 assists, 7 points, +3, 18 shots on goal and 3 special teams points.

Gomez is often considered to be a bit overrated, but he is still a pretty valuable fantasy player. His passing ability is what typically pads his scoring totals, but he has been known to score a goal or two. He might not be the same guy he was five years ago, but he is still showing his fantasy worth in Montreal. His totals over the past week:  1 goal, 5 assists, 6 points, +2, 16 shots on goal, and 1 special teams point.

Crosby is as good in the fantasy realm as he is in the National Hockey League. He contributes in every single category and was probably taken in your drafts top three. He had another great fantasy week posting: 3 goals, 3 assists, 6 points, even, 16 shots on goal and 2 special teams points.

Ovechkin, like Crosby, is just as amazing in the fantasy realm as he is in real life. He was probably taken in the top two of your league’s draft. His totals this past week place him at the top of the left wing list. 2 goals, 4 assists, 6 points, -2, 23 shots on goal, 5 special team points.

Sturm is not one of the sexiest names available in fantasy leagues, but he is always a very serviceable player. Guys like Sturm are very valuable in later rounds and go a long way towards securing fantasy championships. This past week, the German Olympian’s totals place him number two on the left wing list. 2 goals, 3 assists, 5 points, +4, 15 shots on goal, 2 special teams points.

Bourque was probably taken in the middle rounds of your draft, but is a valuable player. Personally, I don’t think that he has had the year that most owners had been hoping for, but if you drafted him you got a week that was good enough to place him number three on the left wing list. 2 goals, 4 assists, 6 points, +4, 12 shots on goal, 1 special teams point

Samuelsson, who was once traded by the Penguins, has gone on to have a very nice NHL career. He was a valuable player for the Detroit Red Wings for many years, but has been money for the Vancouver Canucks this season. His totals over the past week have placed him atop the right wing list. 5 goals, 2 assists, 7 points, +5, 15 shots on goal.

Stewart has long been full of potential, but it hasn’t always translated on the ice. Well, that has all changed this season, which has been a breakout for the young power forward. He has been a huge part of the Avalanches’ resurgence this year. His week was good enough for second on the right wing list. 4 goals, 3 assists, 7 points, even, 9 shots on goal, 1 special teams point.

Who says this guy is slowing down? He has long been one of the top fantasy players in the game and his past week echoes that point. Iginla seems to have been invigorated by the Olympics and has been every bit as good lately as he was during the years in which he competed for some impressive league hardware such as the Art Ross and Hart Trophy. 4 goals, 2 assists, 6 points, +4, 11 shots on goal, 2 special teams points.

Top three defensemen of the week:

Markov’s season was placed in serious jeopardy when his ankle was cut by the skate blade of Carey Price in the first game of the season, however he has been better than ever since his recovery. Markov is the straw that stirs Montreal’s power play drink and he had a great week posting some impressive totals. 1 goal, 5 assists, 6 points, +8, 6 shots on goal, 1 special team point.

Lidstrom might be getting older, but he is still one of the best in the game. His totals aren’t where they used to be, but he had a pretty impressive fantasy week. His off year is more a product of his teams struggles than his own deterioration and that has been evidenced by the fact that his numbers have gotten better as his team has gotten healthier. 1 goal, 3 assists, 4 points, +2, 6 shots on goal, 3 special teams points.

Sure his best fantasy seasons might have occurred ages ago in Toronto, but he is still plugging along in Florida. McCabe hasn’t always put up the numbers that some thought he would down south, mainly because of injuries, but he is has shown signs of still being a pretty decent fantasy defenseman. His totals over the last week place him third. 4 assists, 4 points, even, 4 shots on goal and 1 special teams point.

Top three goaltenders of the week:

Halak should be the full time starter in Montreal. Period. End of sentence. He has outplayed Carey Price all season long, but has yet to be anointed the full time starter. However, when he gets to play a series of games in a row, he cashes them in, which is what he did last week placing him at number one on this list. 4 wins, 2,36 goals against average and a .912 save percentage.

Many thought that Kiprusoff’s melt down against Team USA in the Olympics would bring with it some lingering effects in the National Hockey League. Well, it hasn’t been all that bad and the speculation seems to be much adieu about nothing. The Kipper had one heck of a week. 2 wins, 1.00 goals against average and a .968 save percentage.

Garon, who won a Stanley Cup backing up Marc Andre Fleury last season, has been a godsend for the Columbus Blue Jackets this season. For whatever reason, their stud Steve Mason suffered one hell of a sophomore slump and Garon has been there to pick up the pieces. His numbers last week place him number three on three on this list. 2 wins, 1.82 goals against average, and a .944 save percentage.

Bergeron was a surprise addition to the Canadien Olympic team, but that selection seems to have sparked him in his return to the NHL. He has been centering the B’s top line since Marc Savard went down with a concussion and he has been putting up some numbers. Over the last week he notched 2 goals, 4 assists, 6 points, +5, 8 shots on goal and 1 special team point. If he is out there grab him.

Mueller has long tantalized fantasy owners with his upside, but he has done nothing but disappoint them since his rookie season. Well, a change of scenery has seemingly jump started the former Everett Silvertip, as he has been great since arriving in Colorado. Over the last week he has gone for 1 goal, 4 assist, 5 points, +3, 7 shots on goal, and 1 special teams point. If you have a roster spot, he should continue to reward.

Dupuis has been one of the best players in the Penguins line-up and that is saying something considering who they can parade out shift to shift. He gets to skate with Crosby often enough, but it looks like he may settle in on Jordan Staal’s wing…not too shabby. He went for 2 goals, 3 assists, 5 points, +3, and 9 shots on goal over the past week. Like Mueller, if you can afford too…add him now.

I don’t have to say much about this kid, as he was amongst the top performers of the week. If he is available in your league, grab him. He could provide in every category…

These three defensemen are very similar point producers… their lines over the last week are all 1 goal, 3 assists, 4 points. They all had 5 or more shots on goal and all but Greene had 2 or more special team points. Tyutin could hurt you in the +/- department a bit, but the others were +2 or better. If you need some punch from the blue line and are in a deep league look for these guys.

Two of the goalies that could be available in your league were mentioned amongst the top producers above… Mathieu Garon and Jaro Halak could each be available. Two more to keep an eye on are Jose Theodore, who is owned in only 44.1 % of ESPN standard leagues and Michael Leighton who is owned in only 21.3 %. Both players, especially Theodore, have been playing a ton of games for their teams and could give you support in multiple statistical categories.