Former Penguin and “Pittsburgh Kid” Ryan Malone to get his head shaved for a great cause… pediatric cancer research. 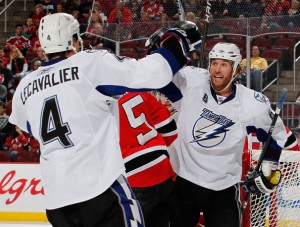 As we all know, hockey players rank amongst the most generous of pro athletes. They are seemingly always willing to sign an autograph, pose for a photo, have a short chat with a fan, and to support causes that they believe in.

They give up their money, their time, their names, and in some instances… their hair!

Hair is what former Penguin and Pittsburgh native Ryan Malone is going to give up for a great cause with a group of his Tampa Bay Lightning teammates and local celebrities. The group is willing to get their collective heads shaved as part of Tampa Bay’s “Cut for a Cure” campaign in order to raise money to be donated to the Pediatric Cancer Foundation and the Vincent Lecavalier Pediatric Cancer & Blood Disorders Center at All Children’s Hospital.

Malone joins a group of Lightning players and media that is headlined by Marty St. Louis, Victor Hedman, Teddy Purcell and Vincent Lecavalier, who has long been a supporter of this cause and a catalyst for raising awareness of pediatric cancer.

The players, media folk, and other local celebrities will be raising contributions between now and April 7th when their locks will be shaved to support the cause.

We are asking that you sponsor Ryan Malone for the event… after all, he is a Pittsburgh kid! But any support that you can offer is much appreciated.

Malone explained his involvement in the event to the campaign’s website.

“My children are the most important thing in my life and I’m thankful for their health. I am happy to participate in Tampa Bay’s Cut for a Cure to help raise much needed awareness for childhood cancer. I’ve recently learned that more than 160,000 children will be diagnosed with cancer this year and if shaving my head can help raise money and awareness I’m all in. It’s only hair – it will grow back!”

Vincent Lecavalier has long been a supporter of this cause and his words hit home, especially having lost my father to cancer in 2007.

“It’s very humbling to me personally to see the emotional strength and courage of the children I meet who are battling cancer. I am shaving my head for all kids who are battling this disease and to let them know they’re not alone and that there is hope. I hope that by participating in Cut for A Cure, my teammates and I will bring awareness in this community and the hockey community nationwide of the need to fund, and find a cure for childhood cancer.”

I understand that it isn’t always easy to donate money during these trying economic times, but if you have a few extra dollars over the next month, think about contributing to this cause and helping Lecavalier, Malone and the gang in this fight.

Info on the cause and websites:

Worldwide, more than 160,000 children are diagnosed with pediatric cancer each year.   On April 7th, more than twenty Tampa Bay business leaders, media personalities and professional athletes, including Vinny Lecavalier of the Tampa Bay Lightning will be taking a big, if not bold, step forward to help curb this staggering statistic. They will be cutting it all off and shaving their heads in order to raise money to be donated to the Pediatric Cancer Foundation and the Vincent Lecavalier Pediatric Cancer & Blood Disorders Center at All Children’s Hospital.

By supporting them and their efforts “to go bald,” you are supporting medical research, programming and pediatric care for children and families battling pediatric cancer and blood disorders.

Check out the “Cut for a Cure” website to see all participants, contributions to date and much more.

You can also find out more about Vincent Lecavalier, his career, and his Pediatric Cancer & Blood Disorders Center at Children’s Hospital at his official website.