I wanted to quickly throw out my selections for the NHL Awards this evening. I participated in Puck Daddy’s poll earlier in the summer and actually had a couple of guys on podium that weren’t even nominated! 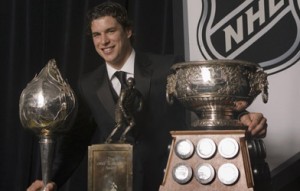 I wanted to quickly throw out my selections for the NHL Awards this evening. I participated in Puck Daddy’s poll earlier in the summer and actually had a couple of guys on podium that weren’t even nominated!

Though a case could be made for Sidney Crosby or Alex Ovechkin, Sedin was by far his team’s and the league’s MVP all season long…especially when you consider that he played a good portion of the year without his usual line-mate and brother, Daniel.

Miller was the best goaltender in the league throughout the season and he singlehandedly gave the light scoring Sabres a chance in every single game that they played.

Though I believe that Jordan Staal is a worthy candidate and Pavel Datsyuk can win it any day of the week, this year Ryan Kesler was by far the best defensive forward in the game…he made a believer out of me during the Olympics when he was winning EVERY face-off.

Though something is telling me to go with Marty St. Louis, Datsyuk is my man.

I will be the first to tell you that Jimmy Howard had an unbelievable season, however I think I graduated high school with him back in 1993…Myers came in at a tough position and thrived!

Duncan Keith was probably the best all around defenseman in the game this season and the voters will recognize that fact tonight… it is worth noting that Doughty doesn’t have long to wait to get his.

Though I feel that this award should be going to “The Monster,” I am going with Kurtis Foster, who completed a nice comeback this season.

Tippett did an amazing job with a team that no one wanted to give any respect too…look for big things moving forward, no matter where they play the games.