For the span of a full decade, the Blackhawks were nearly irrelevant in the NHL. From the 1997/98 season through 2008, one of the most storied franchises in the league only made the postseason once – a quick five-game cameo in 2002. 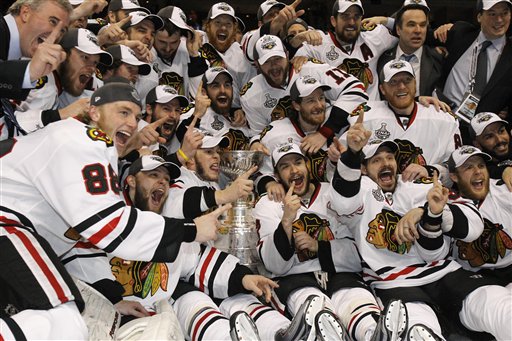 For the span of a full decade, the Blackhawks were nearly irrelevant in the NHL.  From the 1997/98 season through 2008, one of the most storied franchises in the league only made the postseason once – a quick five-game cameo in 2002.  People had stopped coming to the United Center as the team was an annual bottom-feeder.

Two men, though, started the makeover of this Original Six franchise after the lockout.  First, there’s chairman Rocky Wirtz.

When Rocky’s father Bill died in 2007, he took over and instantly changed the hockey culture in Chicago.  He re-energized and brought back the fan base with his vision and passion for the team.  Rocky was able to put the ‘Hawks back on television locally, which was a huge step in the right direction to get the fans back.

Then he gave general manager Dale Tallon – the second man in this equation – the finances to put together a winning product on the ice.

Tallon was promoted from his role as assistant in 2005.  He immediately put his mark on the Blackhawks with a series of smart draft picks, trades, and free agent signees.  Some of those acquisitions included Patrick Sharp and Kris Versteeg in pick-pocket trades, as well as Brian Campbell and Marian Hossa through long-term deals in free agency.

None were bigger, though, than top draft picks Jonathan Toews and Patrick Kane.

Toews was drafted third overall in 2006 out of the University of North Dakota.  He easily could have been selected by Pittsburgh, slotted second right before Chicago, but they instead went with Jordan Staal.  I think Chicago is pleased Toews was available at number three! He spent one more year in college before making the jump to Chicago in 2007.

Earlier that summer, Tallon and company – who were lucky enough to win the lottery against the odds – took Kane first overall.  Some stated that he would be too small to live up to the billing of the top pick in the NHL; luckily, Tallon drafted the ‘small’ American because of his unbelievable skill.

Between the pair of youngsters, they have experienced a lot of individual success in the game of hockey over their short careers (and not just for the Blackhawks).  Toews won consecutive World Junior Championships in 2006 and 2007, and added another large feather to his cap in February when he won gold in the Olympics with Canada.

Kane has also had his own success on the international level, being the face of USA Hockey and claiming silver in Vancouver earlier this year.

#19 and #88 have opposite personalities away from the rink, and that translates onto the ice as well.  Toews – known as ‘Captain Serious’ – is one of the best all-around centers in the NHL that can play in any situation; Kane is an offensive-minded winger that dazzles with his puck handling and goal-scoring abilities.

But in one of the biggest U.S. markets, Toews and Kane have teamed up and taken the Windy City by storm.  They were brought up together prior to the 2007/08 season, are co-faces of the franchise, and bring ‘Hawks fans out of their seats on a nightly basis at United Center.

Those two budding superstars shouldn’t get all of the credit that Chicago has achieved in the last couple years.  Antti Niemi – who was undrafted and discovered by Tallon – saved Cristobal Huet’s bacon between the pipes, and is a big reason why the Frenchman will have a ring on his finger in short order.

Also, Coach Joel Quenneville deserves some accolades, too.  He stepped in behind the bench in the opening stages of the 2008/09 season when Denis Savard was let go.  It’s easy to say ‘Coach Q’ was lucky to inherit a very skilled team; while that could be true, Quenneville had to push the right buttons all year long, and made the line changes prior to Game 5 that seemed to be the last nail in Philadelphia’s coffin.

Quenneville also had to keep a young team with lofty expectations (Cup or bust) focused on the task at hand from October through June – a total of 104 games.

It’s amazing what kind of transformation the Blackhawks’ franchise has gone through in such a short period of time.  Just three years ago, they were one of the worst teams in the league.  However, between then and now, the ‘Madhouse on Madison’ was reborn; ‘Chelsea Dagger’ became the team’s theme song; and the City of Chicago began to once again embrace their Blackhawks.

Now, for the first time since John F. Kennedy was in office, they are Stanley Cup champions.

49 years of futility came to an end thanks to Rocky Wirtz and Dale Tallon, as they were the architects in this rather quick, successful rebuild.

You also cannot forget Jonathan Toews and Patrick Kane, the on-ice tandem that carried the ‘Hawks to their renaissance.  On Wednesday night, the two took the highest honor after winning the Stanley Cup Final: Toews won the Conn Smythe as the postseason MVP, while Kane scored the Cup-clinching overtime goal.  It seems only fitting, doesn’t it?