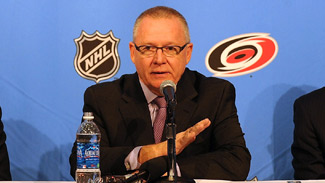 Though I have the DOAMM running, I felt that this transcript deserved its own post, especially after it took me 30 minutes to transcribe!

On when he contacted Ray Shero:

We made Ray aware of our interest right after their season was over and he made the comment that he may not be able to keep all three of their big guys and we had one other conversation after that. I talked to him this afternoon at 4:20, we agreed to meet in his office and we made the deal about 6:45.

On the price he had to pay to get Jordan Staal:

When you are acquiring an elite player you have to give a lot for him and we did. We paid Pittsburgh a good price, we love Brendan Sutter, he’s been a very good player for us, I think hes got a very great career ahead of him; Doumolin is another one coiming out of Boston College, a good young defenseman… so this was certainly a very fair hockey deal.

On if he thinks he can sign Jordan to an extension:

I hope so I mean, for many years the family said that the brothers want to play together so, now their together, why would he want to go somewhere else.

On what he told Eric Staal prior to making this deal:

I told Eric at the end of the season we were going to try to improve our team and we were going to look at some good players from around the league and I think he understood what I was saying who one of them was.

Why he pulled the trigger on this deal:

I believe this improves our team. You name me two of three other players center ice man who are like Jordan Staal… you just can’t find them. I don’t see this as a timing thing or a bold move. It just happened that he was available to us and I was able to make the deal.

I left him a message and told him that I didn’t expect to hear back for a few days.

When he will approach Jordan for contract talks:

We’ll start in July. There’s no reason to leave it for any length of time. I’m aware that Pittsburgh made him a huge offer and I think it’s only right that we start talking to him in early July.

On his confidence that he’d pull off the deal:

We weren’t the only team involved in the thing, so I wasn’t real sure until we got it done.

Brandon Sutter is an exceptionally good player; I think one of the best two-way centers in the league. I think when you look at Pittsburgh, what they have now, to replace Jordan Staal with him, he’s a great fit for him.

Rutherford refers to Brian Doumolin a “real good defenseman who we’ve always liked.” And that he sees him as a guy who could play in the top four or five for a long time.

On if the brothers would play together on the same line:

Eric could move to the wing and play with Jordan, but by moving Brandon that makes that harder to do.