The date was February 28, 2010. Canada and USA were deadlocked at two apiece in overtime, in one of the most memorable hockey games and settings in the history of the game. 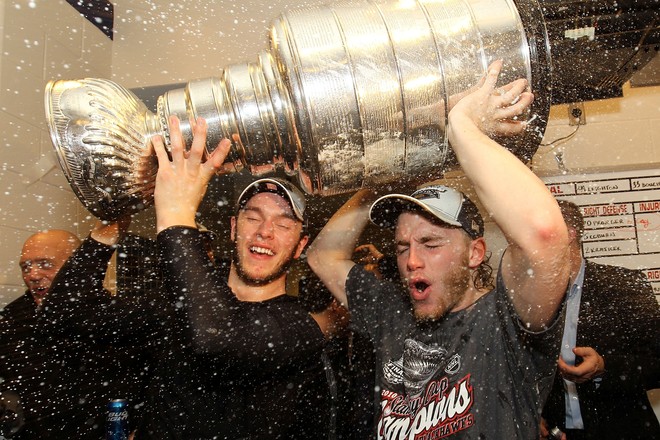 The date was February 28, 2010. Canada and USA were deadlocked at two apiece in overtime, in one of the most memorable hockey games and settings in the history of the game. Sidney Crosby picked up a pass from the corner, quickly shot the puck through Ryan Miller’s five-hole from an odd angle, and celebrated a Gold Medal with the rest of his countrymen in the ensuing moments. Sound familiar?

Patrick Kane received a pass from Brian Campbell along the half-boards, stick-handled and skated by Kimmo Timonen, and beat Michael Leighton five-hole from an odd angle to give the Chicago Blackhawks their first Stanley Cup in nearly five decades. Kane seemed to be the only person on this planet to know the puck went in; it took the rest of us a minute and a couple of replays to realize the goal would count.

After the puck crossed the goal line and hid under the padding inside the net, Kane led a flock of half-stunned Blackhawks down ice in celebration of winning Lord Stanley. The Buffalo native threw his gloves and stick in the air, skated 180 feet to meet a confused Antti Niemi, and took a couple victory laps as the refs were finding the puck.

On that cold February afternoon in Vancouver, Kane was on the other side of Crosby’s ‘golden goal’. The craftily-skilled American was disappointed as he received his Silver Medal during the post-game ceremonies. His nation’s magic carpet ride came to an end without the dream coming to fruition.

This time, the color silver has a whole new meaning!

When his hangover wears off a week (or month) from now, ‘Kaner’ will really start to appreciate exactly what he accomplished.

First of all, his Cup-clinching goal will last a lifetime in the Windy City. As it’s been mentioned everywhere, the Blackhawks’ Cup drought stood at 49 years before last night. Their fans have suffered long enough, and will celebrate this for an infinite amount of time.

It also brought a championship back to Chicago. It’s the first time the city as a whole gets to enjoy a title since the 1990’s dynasty of the Chicago Bulls. The White Sox did win in 2005, but they come in second on the baseball totem pole in that city to the Cubs (who are going on 103 years strong since winning their last World Series).

Second, Kane became the 16th player in NHL history to score the Cup-clincher in overtime. The last to do it was Jason Arnott with the Devils back in 2000. Kane’s name will always be connected to this Blackhawks title – just like the other 15 in this rare company.

This is something all hockey players dream of when growing up: scoring a goal in overtime to win the Stanley Cup. Kane doesn’t have to dream about it anymore.