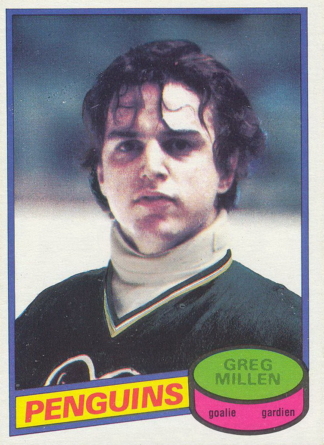 Malkamania is running down some history again… this time he shares some of his favorites from back in the day!

It is too easy saying one of those three, so I will take you back in time to some of my favorites that were came through town over the years. Some you may have seen play, some you may have heard of and some may have you saying, “Who’s that?”   So here we go… 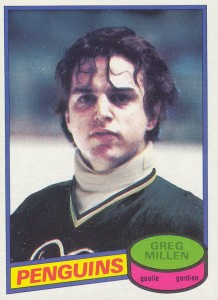 Greg Millen – Greg was actually a Penguins’ draft pick, taken in the 6th round in 1977.  He came to the big club in 1978-1979 and played well with a 14-11-1 record.  Millen was only 5’9, if that, but the kid was a ball of energy and was exciting to watch between the pipes doing his little dances to keep limber.  Greg played three years in Pgh going 57-56-18 in 135 games with a 3.83 goals against which was pretty good considering the team in front of him during those years.  He had a heartbreaking loss in St. Louis during the playoffs in double overtime in game 5…Mike Crombeen scored the goal. It was my first away playoff game ever.  After that, Millen signed with Hartford as a free agent; we received Pat Boutette, who had one good year, and Kevin McClelland, who eventually figured out how to play hockey in Edmonton with our buddy Gretzky.  Way to go Bastein.

Bob Battleship Kelly – On January 17th 1974 a trade was made that showed the Penguins would no longer get pushed around.  Bob ‘Battleship’ Kelly, Steve Durbano and  Ab De Marco Jr were brought in from St. Louis in exchange for Greg Polis, Bryan Watson and a draft pick.  There would be no more getting bullied in our rink, no more Flyer bullying.  Seems the NHL majority knew Battleship and his destroyer fists.  The guy also could shoot the biscuit with two 20 plus goal seasons in 74-75 and 75-76 on his resume.  The next year he slipped to 10 goals, but still he would, as I like to say, “Let ‘em know you’re there!”.   The next year he was traded to Chicago and I was heartbroken.  I was hoping to see him come back for the last game at the Arena, but he was not one of the ones invited back.  There was nothing better in the day hearing Vince playing Anchors Aweigh in the mid 70’s.

Dave Burrows – Burrows is probably one of the most underrated defensive defensemen ever to play the game.   If he would have played in Montreal, you would hear of him like you do Savard, Robinson and so on. Talk about shot blocking, here was a guy who had no fear to do so, a guy forwards just could not beat.  And, believe it or not, he was chosen to play in two all star games with Pittsburgh, and was picked to play for team Canada in 1976.  Burrows manned the blue line for seven seasons, went to Toronto, and came back to Pittsburgh for one more season, but retired due to the effects of a broken ankle.  There were pushes to try to get Burrows elected to the hall of fame, but they were unsuccessful.  The guy was magical to watch.  Everyone loved how Rod Scuderi played a defensive game, imagine the effort times 20.  That was Dave Burrows, and I was so honored to watch him play!

Mario Faubert – He was a Penguin 4th round pick in 1974, the same year that Pierre LaRouche was chosen.  Mario spent his first few years between the big club and Hershey until finally getting his break in 1979-80.  Up to that point he did show flashes of brilliance, but would be sent back for more “seasoning” (there is that word that makes some people cringe).  It seems that Mario Faubert and Randy Carlyle would be the defensive pairing and were dynamite on the blue line on the power play.  In 1980-1981 Carlyle won the Norris trophy with big help from Faubert and his 52 points.  Mario had a dynamite shot from the point and could pass that puck with great efficiency.  He was finally coming into his own in the ‘Burgh, but the next year he became another “Penguins’ Bad Luck Story.”  November 18th, in a home game against St. Louis, Faubert suffered a serious leg injury and never played another game.  I can still hear him yell as I write this.  Another player, starting to play great hockey for us, is taken away too soon.