Malkamania runs down a bit more history today as he takes a look at the California Golden Seals! 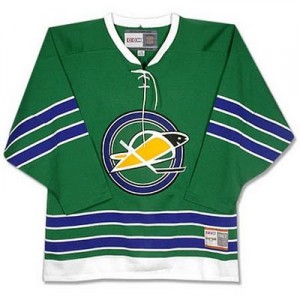 It’s time we talk about some defunct teams that aren’t here that I enjoyed seeing throughout the years. Reading the book “Breakaway” (Andy Conte) made me realize just how lucky we are that we still have a team, and besides this episode, we have had a few other close calls.  These teams weren’t that lucky.

My buddy George Weise’s favorite team was the Oakland/California Golden Seals (1967-1976).  If you ask him, this was the only team that we saw play at the igloo, and we never missed their games. What I remember about them the most is the green and yellow uniforms, the logo with those weird looking seals with the hockey stick and those white skates.  (Lots of Peggy Fleming references at the glass).  They also had many bad teams.  In their 9-years of existence, they only made the playoffs twice, and won a total of 3 games, all against the Los Angeles Kings.  They were swept in four by our Pittsburgh Penguins in their only other playoff appearance.

So you ask why the Golden Seals were so bad.  Well, it seems they basically had the same concept as Penguins management back in the day, trade young players for old washed up ones.  They traded four of their nine first round picks away, and the ones they drafted are not names that make you say “what a player!”  Their first ever pick was Ken Hicks and their last 1st rounder was Ralph Klassen.  In between are names I will not even bother to mention.

They had a total of eight coaches in nine years, so it shows no stability behind the bench, as well as ten General Managers in that same time frame.  They had a General Manager of note in 1970, Bow Tie Bill Torrey of New York Islander fame.  He lasted half a year with numerous clashes with owner Charles O’Finley of the Oakland A’s fame.  Seems he bought the hockey team for no more than a side show.  He was the originator of the white skates.  Speaking of other owners of the Seals before Charlie O, Whitey Ford and Pat Sumerall were in a group before that owned the Seals.  Also the Gund brothers; they were the ones that pulled the plug and brought the team to Cleveland and renamed them the Barons.

Now to talk about some of the players who donned the Seals uniforms.  I will mention that they only had one major award winner and that was Ted Hampson, who won the Masterton Trophy for dedication.  Of all the players to wear the Seals uniform, only one player is in the hall of fame, and that would be Harry Howell, who played two seasons for them.  And they only had one player play in the all star game, Al MacAdam, in their last season.  Also Reggie Leach, of Flyers fame, and our own Craig Patrick.  Worth noting that former Penguins’ forward Warren Young was a Seals’ 4th round pick in 1976. 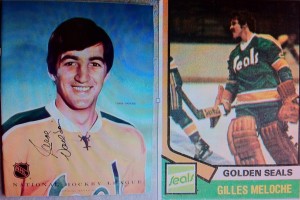 The first player that actually showed talent was Carol Vadnais, a defenseman cut out in the Bobby Orr style.  He played for three plus years and actually put up 24 goals one season for the Seals.  He was traded to Boston in 1972 and won the Stanley Cup playing alongside Bobby Orr.  Then we have future star Dennis Maruk, of Washington Caps fame.  Maruk played one year with the Seals as a rookie, had 62 points and at the time held the record for shorthanded goals by a player with five. (You should know who holds the record now).  And last but not least the best player ever to play with the Seals, goalie Gilles Meloche.  Many an NHL scout and fans would say, “If only Meloche played for another team“, that’s how good he was.  It was a feat that he, in two of his years with the Seals, had a GAA under 3.5.   His won/loss record doesn’t show how good he was, or how he and he alone kept his team in games only to lose at the end.  It’s amazing he is not shell shocked today due to all of the shots he faced.

Well that is a little bit of history of an NHL team that is no more; I will be doing more of these in the future.  The Seals, by far, were the worst team I ever saw, but in those nine years they never had a chance to succeed. You have to wonder just how many people really cared about the Seals back then.

They actually had a crowd of 2600 show up to watch a game once.

Friday’s game is being played on Veteran’s Day. Please make sure you thank those people you know who are presently serving or who have previously served our country and say a prayer for those who lost their lives serving for our country. Also, make sure you give Sgt Bob a round of applause and welcome him back; he will be doing the anthem on the 11th!

Also will he be back or won’t he?  Take care see you at the games!