Any adjective in the book could have described Game 1: weird, wacky, crazy, a circus… you name it! It could have been compared to an All-Star Game with a Stanley Cup Final atmosphere; at least in the first two periods it was. 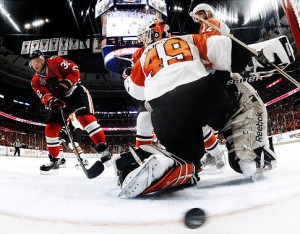 Any adjective in the book could have described Game 1: weird, wacky, crazy, a circus… you name it! It could have been compared to an All-Star Game with a Stanley Cup Final atmosphere; at least in the first two periods it was. What transpired in the third period, though, should be an appetizer for what we’ll see the rest of the series.

In that third period, there were only 14 shots combined as both the Blackhawks and Flyers took a 180-degree turn from periods one and two. There weren’t many great scoring chances, and the goaltending stepped up when needed – specifically Antti Niemi. Heading into tonight, I suspect that will be the type of game we’ll see. But the first 40 minutes of Game 1 has both teams making much-needed adjustments.

Philadelphia isn’t happy after a lackluster performance. I don’t know if it would have mattered if they started Michael Leighton or Brian Boucher… the defense in front of them was awful. Looking back, you can blame the defense on at least five of Chicago’s goals. Flyers defensemen were caught out of position time and time again. I’m confident that Peter Laviolette will make those proper adjustments.

With that being said, Chicago can’t be pleased either with the way they had to win on Saturday. They, too, had some costly turnovers and breakdowns defensively, directly leading to goals. Also, the top line didn’t play the way they have all postseason… I put the majority of that on the shoulders of Patrick Kane. One minute, he’d be trying to do much; the other, he’d look lackadaisical.

Whatever improvements the coaching staffs feel need to be made, they better be the right ones, because Game 2’s meaning is pretty shocking.

If you exclude last year, six straight Game 2 winners in the finals went on to the win the Cup. Historically, 71.7 percent of Game 2 victors ultimately win the series; and when a team wins to take a 2-0 series lead, that number rises to 87.1 percent. Yeah, this game is fairly important!

The fact that both teams can improve tells me that this will be a better game than Saturday (and low-scoring). And, given that Joel Quenneville’s crew isn’t happy with how Game 1 went down, I give them the slight nod to win tonight. While I don’t see Jonathan Toews being shut out again, I do see the depth pulling through once again. But if Philly can establish their style of game early, they could easily win this all-important Game 2.

If you tune in tonight to see another game with 11 goals, well, you’ll be on the wrong channel! Look for the intensity and hitting to ratchet up, and also some more fireworks between Chris Pronger and Dustin Byfuglien. This one will go right down to the wire, and I think the first team to three will win… and it wouldn’t be surprising to see it go to overtime!

Simply put, tonight’s contest will be played how a Stanley Cup Final game should be – no more of that weird, wacky, crazy, circus crap from Saturday!