The Penguins and Canadiens took the ice in Pittsburgh this morning for their pre-game skate and each team is ready to get this series underway! 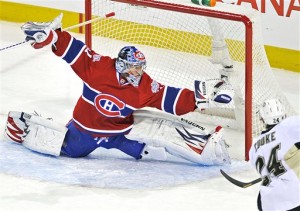 The Penguins and Canadiens took the ice in Pittsburgh this morning for their pre-game skate and each team is ready to get this series underway! Though the Canadiens just played a couple nights ago, it seems that the Penguins have been on the shelf for much longer than it actually has been.

Dan Bylsma has called Chris Kunitz and Jordan Leopold game time decisions. It is expected that Kunitz will be in the line-up and skating with his line mates Sidney Crosby and Bill Guerin this evening. Leopold will most likely not play.

Tyler Kennedy was ruled out by Dan Bylsma as he is still recovering from his lower body injury.

Jacques Martin has ruled Jaroslav Spacek out for tonight as well. He had been dealing with a virus during the first round and is seemingly still not ready to go.

The Penguins feel that they have a plan for beating Jaro Halak and the Canadiens, especially after dealing with the tight checking and shot blocking Ottawa Senators. Sure the Canadiens have blocked the most shots in the league through one round of action, but the Senators blocked the second most and did it in one less game. The Penguins were awfully frustrated by the Sens approach in the first two games that they played, but then they seemed to adapt. They still tried to get the puck to the net a lot, but didn’t necessarily care if they were hitting the net. They were content to get the puck into areas where their forwards could crash the net and chip in rebounds etc…a la Matt Cooke in the decisive game 6 victory.

Bylsma also cited the goal the Brooks Laich scored against Halak in game 7 as the type of tally his squad would have to look for. There were two rebounds and Laich finally got it in the net.

The Canadiens are planning on changing much in their approach. They intend to utilize their speedy forwards down low to try and wear down the Penguins defense. I would also count on their special teams to be a huge factor for them. They proved in the first round that they don’t need a ton of opportunities to win games. They were able to manufacture offense even when they were being pressed back on their heels a bit defensively.

Game one is roughly three hours away… this should be an exciting start to a great series. I will be live at Mellon Arena bringing you all of the action. I may run a cover it live this evening… look for a twitter/FB link if so. Either way, I will be back with tons more later!