Ryan Porth previews the Stanley Cup Final, which kicks off tonight at the United Center in Chicago. 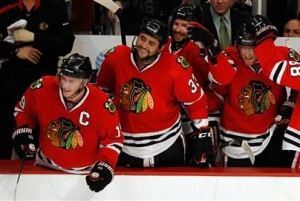 (Editor’s note: this piece was originally scheduled to run on Friday, which would have been in line with Ryan’s regular schedule, however we held it back until today, so it would serve as a true preview of the the Final which kicks off tonight.)

How They Got Here… 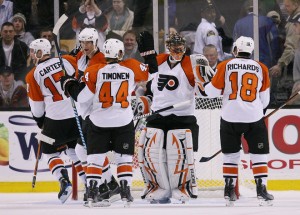 Tale of the Tape…

Edge: Blackhawks… I feel like the Hawks’ depth is a tad better with the two-way capabilities of the top three lines.

Edge: Even… Both units are solid in their own right.

Edge: Blackhawks… By facing Vancouver and San Jose, Niemi is prepared for what Philly will throw at him.

Edge: Blackhawks… This is a very slight edge towards Chicago because of their man advantage.

Edge: Flyers… Peter Laviolette won a Cup in 2006, and has done a remarkable job this postseason.

Edge: Even… I don’t see any team having advantage over the other here. 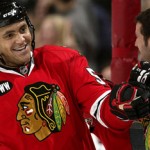 Dustin Byfuglien… This is where the ‘Hawks could have a pretty big advantage over Philly.  If ‘Buff’ is doing his job, he’s going to be camping out in front of Leighton most of time.  One, Leighton hasn’t really seen much traffic in his crease in his 8 playoff games; and two, it could mean Pronger spends equal or more time defending Byfuglien than slowing down Kane and Toews.  If the momentum that ‘Buff’ has gathered the last two rounds carries over into this series, he’ll more than likely cause fits for the Flyers as well.

Matt Carle… In relation to Byfuglien being Chicago’s x-factor, Carle can make a big impact in this series.  All of the time that Carle spent next to Pronger this season can pay off here.  The 25-year-old defenseman has played like a veteran for most of the year, and leads Philly blueliners in plus/minus – not Pronger.  If he can be just as effective against Chicago’s top line, and maybe take on ‘Big Buff’ at times, it’ll do Philly wonders.  Plus, Carle has solid offensive skills for a defenseman… so great breakout passes and smart shots from the point will be key, too.

Keys to the Series…

1. Third-line success… The unit of Bolland, Versteeg, and Ladd has been awesome in these playoffs – offensively and defensively.  If they once again provide a third scoring line, these ‘Hawks will again be very difficult to beat.

2. ‘Speed Demons’… Chicago has the speed advantage in this series.  Kane and company need to use it to get behind the Flyers’ defensemen, and possibly draw some penalties.

1. Win the special teams battle… While the PK has been great, the power play hasn’t been as successful as of late.  Special teams will be a big factor this series, and Philly needs to have both units clicking to ultimately win.

2. Neutralize ‘Big Buff’… Byfuglien has become a force on Chicago’s top line, and could be a main focus for Pronger.  They have to find a way to hit him and get him out of Leighton’s kitchen – without getting away from slowing down Kane and Toews.

Toews vs. Richards… It’s unknown how much these two Team Canada stalwarts will face each other in this series.  But both play a similar style, are dangerous on the PK, and are their team’s most important offensive players.  It’ll be interesting to see how these two captains play – especially when they’re on the ice at the same time.

Let me get this out of the way quickly: no!  The ‘Cup-jinx’ surrounding Hossa will have nothing to do with the outcome of this series.  He’s eventually going to win one with Chicago, and can speed up the process by finally busting out in this series.

Flyers- Can their incredible run end with a title?

Laviolette’s crew has been the story of the playoffs – from sneaking in via a shootout to overcoming the 0-3 deficit to Boston, they’ve definitely had a storybook postseason.  Is it meant to end with a Cup ring?

Why the Blackhawks will win…

It’s a dangerous proposition that this ‘Hawks team is hitting on all cylinders, and I have a good feeling they’ll come out on top here.  They have all of the ingredients to win this thing.  Chicago has the necessary skill, depth, and versatility to beat anybody, and can play their own game no matter what the venue.  All four of their lines can swing momentum, whether it’s a goal, a solid sequence, or a big hit – that’s hard to come by in this league.  Niemi has been exceptional through three rounds, getting better each step of the way.  I really feel like this team is ready to break the longest Cup drought in the NHL.

Why the Flyers will win…

This team has done an outstanding job not giving up all season… and they’ll have to do the same here.  There’s going to be points in this series where the Flyers will be on their heels because of the Hawks’ pressure, so they must find a way to survive the storms more consistently than San Jose or Vancouver did.  Pronger is going to be a big factor for Philly, but others will have to step up if they wish to slow down Chicago’s attack.  Up front, if the second and third lines can provide quality secondary scoring, they have a chance.  But in the end, I think it’s a tough task to beat Chicago four times out of seven. 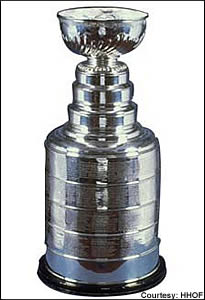 This is going to be one helluva final, and it should showcase the league in great fashion!  These are two teams that love to pressure their opponent, and both have rabid fan bases ready to win again.  It’s been at least 35 years since either of these storied franchises has won the Cup.  When picking this series, I could picture both teams winning; but I simply couldn’t picture the ‘Hawks losing.  I’m anticipating a long series, however, as Philly has been through too much to check out early.  Their mentality will keep them in every game, and I think they’d keep Chicago from celebrating in Philly if the situation comes about.  So with that being said, I think the Blackhawks get the job done on home-ice in Game 7.