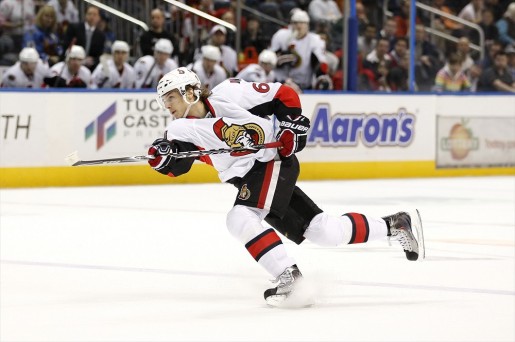 Al Willig takes us through an in-depth look at the Ottawa Senators.

Sure, I was angry and I will find ways to display my displeasure, but the greatest sport on earth demands my attention and my attention you shall have.  The “who was wrong” discussion has been argued ad nauseum on all the boards so I see no reason to re-hash that here or add my 2 cents.  So, let us get on to the Senators, shall we?

There are reasons for optimism in the Canadian capital and reasons for that optimism to be guarded.  I would best describe the situation in Ottawa as one of transition and that should continue for one more season after this one.  There are two new characters in the top six forwards and three new faces on defense.  Next year, there will be another opening in the top six with the likely retirement of Daniel Alfredsson,  In addition, Sergei Gonchar is unlikely to be re-signed this offseason.

The Senators will have two major questions in their top six forwards to start the season.  Jakob Silfverberg is slated to begin the season on the top line with Jason Spezza and Milan Michalek.  Silfverberg was the MVP of the Swedish Elite league a season ago with 24 goals and 54 points in 49 games at 21 years old.  He was the leading scorer in Binghamton this year through 34 games as he adjusted to the NHL size rinks.  He has a premier playmaker skating up the middle and a mature two-way game for his age.  The Calder trophy discussion probably does not start with Silfverberg (Hello, Justin Schultz), but there is very good reason to think he will be in the conversation given the situation in which he begins the season.

The oft-injured, Guillaume Latendresse will begin the season patrolling the left side with Kyle Turris and the (hopefully) ageless Captain Alfie.  There are three questions that will be answered by this line: can Latendresse return to the “25 goals in 55 games” pace he displayed with the Wild a couple seasons back (and stay healthy in the process) ; does Alfredsson have enough in the tank for a compressed schedule and; will the 10 pounds added by Kyle Turris translate into improvement on both ends of the ice.  I guess that is four questions.

The additions of Latendresse and Silfverberg allow for Colin Greening to move to the third line where he is much better suited.  Overall, the third line does not have the same ‘pop’ as when Fisher, Vermette and Havlat were roaming the ice together, but it is not bad offensively either.  There will likely be some juggling among the bottom six but expect Peter Regin, Chris Neil and Greening to start the season together.  With the speed, size, grit and talent these three have, I would expect them to chip in at least 20 goals in the shortened season.  Some combination of Zack Smith, Jim O’Brien, Erik Condra and Kaspars Daugavins will make up a hard working energy line.

Gone are Filip Kuba, Matt Gilroy and Matt Carkner; I will stop short of saying “good riddance”, but I was not sad to see any of them go.  In addition, Jared Cowen, who was already a defensive gem and was showing more than enough offensive abilities, is lost for the season to injury.  Enter Marc Methot, picked up in a trade with Columbus for Nick Foligno, Patrick Wiercioch, Mark Borowiecki and Andre Benoit to the defensive corp.  Mike Lundin was also acquired, but I suspect he will be relegated to the extra defenseman roll if he is even able to crack the top seven upon his return from injury.  Methot is penciled in next to Erik Karlsson.  He will not be expected to light up the world offensively and his words suggest he understands his role in the pairing very well. Methot is a hard-nosed, defensive defenseman and will be called upon to have Karlsson’s back when teams inevitably start to take liberties with the undersized Norris Trophy winner.  Borowiecki is a steady, no-frills defenseman and least likely of the three rookies to look out of place given his ‘keep it simple’ approach.  Wiercioch has more offensive skill and certainly has NHL size at 6’5” and 210 pounds.  I suspect there will be some stumbling for him adjusting to the speed of the NHL, but he will not be counted on for big minutes either.  Benoit was partnered with Wiercioch on the Bingo top pairing.  He is undersized but has a very good hockey IQ along with some offensive skill, as well as being the captain of the Baby Sens.    The sixth defenseman in the lineup, will likely depend greatly on the opponent and the perceived needs of the team on any given night.

The holdovers, Karlsson, Phillips, Gonchar along with Methot, will be counted on to chew up the majority of minutes.  While the 5 on 5 pairings will combine youth and experience, the specialty team minutes will likely be gobbled up by the top four.

Craig Anderson is the number one goalie coming into the season.  Having said that, he has not been playing hockey since September as have Robin Lehner and Ben Bishop; and they’ve been playing hockey very well in the AHL.  All three goalies remain on the 23 man roster and are all traveling to Winnipeg for the first game.  There is no proclamation as to who the starter will be.  It would make some sense to give Robin Lehner the ball to start the season as he has dominated the AHL with a 1.66 GAA and .945 Sv% and perhaps as important, is the change in attitude.  At least on the surface, gone is the whiner who balked at being sent to the minors and then treaded water through the AHL season.  He has put the Binghamton team on his back and said all the right things which is what most of us were wanting to see last year.  This situation is being watched closely in Ottawa with some in the press calling for Lehner to be the outright number 1.  I am on record as having no great love for Craig Anderson and I am definitely not a fan of the 4th year on his contract.  However, Paul MacLean has earned the right to make this call, unquestioned.  No one is closer to the situation or has a better feel for this team.  With a compressed schedule, there will be plenty of opportunity for two goalies to play and probably for all three at the beginning of the season. Predicting which two goalies will be on the roster at season’s end is probably a fool’s errand although I would doubt that both of them will be under 30 years old; quite a reach, I know.

Spin of the Big Wheel

Where will this team end up?  Unlike last season when they were picked dead last in the east by any number of outlets (personally, I had them no better than 11th), this team is not flying under anyone’s radar.  The answer to how they will perform lies largely on two items; can this team adequately protect Erik Karlsson and will the young defensemen hold their own?  As far as Karlsson goes, he does a reasonable job of protecting himself just by using his incredible speed and quickness to avoid checks.  But failing that, there will be some lumps absorbed by a number of players sticking up for him.  Much has been made of the fact that Zenon Konopka and Matt Carkner are no longer around to smash fist into face.  This group will have to rely on team toughness and the Senators have that in spades.  Borowiecki, Methot, Smith and most of all Neil can definitely go around the block.  Ten years ago, it would have caused a bit of concern that there was not a Carkner in the lineup, but today is today and fully half the teams do not waste a roster spot on a true heavy weight.  While Neil does not scare the likes of Chara or Lucic (and really, who does), he does not back down to them, either. Is the “team toughness” route sufficient to keep the rats at bay?  I say yes.  As far as how the young defense holds up, there is a lot of “show me” yet to come.  Sorry, I do not have an answer for that.

When it is said and done, I suspect the Senators are a team that will finish in the 6 to 9 range in the East.  The Rangers, Flyers, Penguins, Capitals and Bruins, barring injury decimation will make the playoffs.  After that, there are a lot of question marks and the Senators are one of them.  The Hurricanes and Lightning should be much improved and the Sabres will be right in the mix.  And since there is always a surprise team in the league, there will be one this year and a lot will depend on how quickly players who have not been playing in the past four months, get their legs under them.  A slow start is not an option for 10 teams.