Jim Butler brings you another dose of his Saturday Morning Coffee… 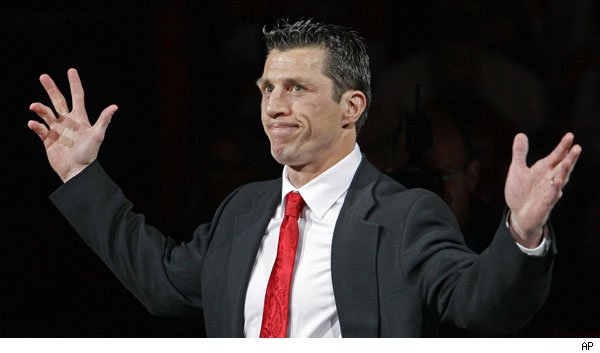 Congrats Rod Brind’amour pure class and one hell of a hockey player! Great job by the Canes, very classy ceremony.

I’m thinking the kaberle trade is a good trade for both teams.

I don’t like the Bruins/Thrashers trade for the Thrash, Peverly will really add a ton to the Bruins. Never been a big fan of Wheeler.

Why do I have a feeling Brett Favre is going to jump out of a giant egg next NFL season and scream “I’m back!”

Jerky Ruutu is only worth a 6th? I woulda thought they could have gotten more for him

Where are the Scranton Wilkes/Barre Pens finding players now?

Where are the Manitoba Moose finding D-man now?

Grabner, I guess 3rd team is a charm!

Jamie Langenbrunner has played in 47 games this year; he’s been on the losing end of 40 of them! Hat tip to John Saquella for that!

Are the Stars really going to fall out of playoff contention? Brad Richards pack your bags.

Travis Hamonic is going to be a beauty, very odd to say this but Islanders might have something going.

Some say plus minus isn’t a solid stat, Nicklas Lidstrom is +432 in his career and he says it is, nuff said.

I wonder if Joffrey Lupul’s favorite player as a kid was Mike Sillinger.

Has there ever been another Lupul or is he the only Palindrome NHL player?

(Ed’s note: Yep… at least one that I know of: Gary Lupul! Famous for getting his clock cleaned by Mario Lemieux)

I can’t watch Bruins games because of Jack Edwards, too bad they seem like a fun team to watch.

Have a great weekend hooligans!