The Canucks sure look like the favorite to win the Cup right now, the Martian Twins and Kesler are all beasts this season.

The Flyers refuse to play more than 30 minutes a game, not a good month long trend.

What the hell happened to the Avalanche? They have been disgraceful. The Avalanche have won only two games since January 18th.

I saw a blond lady this week that looked like Dikembe Mutombo, it was very odd. If she started wagging her finger at me I was gone.

Nobody can beat the Devils except the Sens, makes no sense to me. I think you will see them falter down the stretch.

The Oilers have called up Teemu Hartikainen, you can never have enough Teemu’s

Can anybody figure the Black Hawks out; I have no clue if they are great or just a borderline playoff team.

Jordan Staal needs a re-start button to this season, he’s even getting high sticked on the bench.

Max Pac might be back in the next couple weeks, Habs fans/media blowing things out of proportion? Really, wow didn’t see that coming!!

Are Kings fans nervous about Jon Quick, he wore down late last season?

And the parade was canceled again in Toronto. I believe that’s 72 parades planned and 72 canceled and counting this season.

Love the NHL St. Patrick’s Day commercial with all the Irish names like O’Donnell, O’Byrne, O’Reilly and finally Ovechkin!

The NHL powers that be need to admit that Phoenix was a swing and a miss, it happens… move on.

Joe Pavelski is a man on a mission for the Sharks right now, the man is playing fantastic hockey. 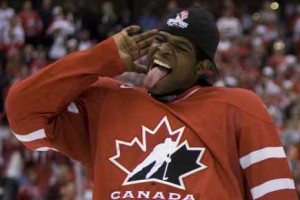 Speaking of the Sharks, Dany Heatley that was simply a stupid play, you deserved 2 games and made yourself look like an idiot.

My 7 year old explained to me in full detail this week what a Tsunami is, when I was 7 I couldn’t even match my socks.

I have a feeling somebody is going to go out of the way to smash PK Subban.

New Metallica is coming out I hear, I hope its old school like Ride The Lightning instead of the Bon Jovi-ish tunes they released in the recent past.

Have a great weekend hooligans…