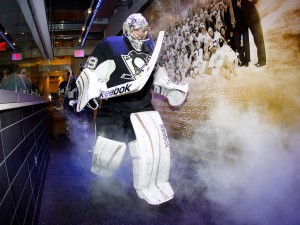 PITTSBURGH – The Pittsburgh Penguins, in a 3-0 hole and left for dead less than a week ago, are still alive in their best-of-seven series against the Philadelphia Flyers.

Jordan Staal and Tyler Kennedy each had a goal and an assist, and goaltender Marc-Andre Fleury turned aside 24 shots, including seven key opportunities during a Flyers’ power play midway through the third as the Penguins shifted their best-of-seven Eastern Conference quarterfinal series back to Philadelphia following a hard-fought 3-2 victory during Game 5 Friday night at Consol Energy Center in Pittsburgh.

“Our mindset doesn’t change,” said Penguins captain Sidney Crosby. “We still have to be desperate.”

The Penguins avoided elimination Friday night in Game 5, and, trailing 3-2 in the best-of-seven series, will have to do it again during Game 6 Sunday in Philadelphia.

“We need to win Game 6 to get back here for Game 7,” said Penguins’ forward Matt Cooke. “It’s a race to four and right now they’re at three and we’re at two.”

But the Penguins, still with their backs against the wall, are a lot closer than they were last Sunday, trailing 3-0 after a disappointing Game 3 loss.

The Penguins staved off elimination in Game 4 and triggered the significant shift in momentum by tying a franchise record for goals in a playoff contest and handing Philadelphia its worst playoff loss in more than a decade. But the Penguins, on the heels of their big 10-3 win, focused on shutting down the Flyers’ defensively in Game 5.

Both teams paid particular attention to defense on Friday.

The Penguins and Flyers, who combined to score 45 goals in four games – most in NHL history through the first four games of a series, settled down in Game 5, combining for just five goals and playing the first game that resembled anything close to playoff hockey.

“I think you expect every game like that,” Crosby said. “It doesn’t always happen that was, as we found out, but both teams prepare for that kind of game and prefer it to be close.” 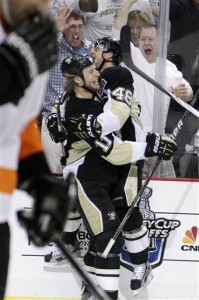 Staal, Kennedy, and Steve Sullivan scored for the Penguins, who snapped a five-game home playoff losing streak with the win.

The Flyers haven’t netted an even-strength goal in two games, but their sizzling power play scored two more as Matt Carle and Scott Hartnell scored Philadelphia’s 10th and 11th goals of the series with the man advantage.

It was two crucial penalty kills, however, that allowed the Penguins to send the series back to Philadelphia.

“You get those kills and it just builds confidence,” Cooke said. “Anytime you can have success it breeds confidence. We got the last two kills and that’s what we’ll remember going forward.”

The Penguins, moments after taking a 3-2 lead, successfully killed an interference call on Evgeni Malkin late in the second.

Fleury was the Penguins best penalty killer during a Philadelphia power play midway through the third that saw the Flyers’ register seven shots.

The beleaguered Penguins’ goaltender, hampered throughout the series because of his inconsistent play, was there to stop all seven, including a sharp pad save from point-blank range on Danny Briere and another from the point on Flyers’ leading point-getter Claude Giroux. Seconds after the power play ended, Fleury came up big with another stop on Hartnell from the top of the crease.

During the last two Penguins’ wins, Fleury has stopped all 33 shots he has faced in the final two periods.

“He was on, and we knew that,” Crosby said. “When he’s playing like that, I think everybody’s pretty confident he’s going to shut the door. We don’t like to have him tested that often, but he was there and he was huge for us tonight.”

The two teams combined for 16 power play goals through four games – five off the NHL record of 21 — and the trend continued in Game 5 as all three first-period goals were scored with the man advantage.

Carle scored Philadelphia’s 10th power play goal of the series, giving the Flyers’ a 1-0 lead as time expired on the man advantage with a wrist shot from the top of the circle. 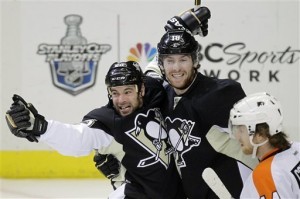 Sullivan tied it with a power-play goal later in the period, whipping a pass from Penguins’ defenseman Kris Letang behind Flyers’ goaltender Ilya Bryzgalov. Bryzgalov, who allowed five goals on just 18 shots in Game 4, rebounded to make 20 saves on Friday.

Philadelphia jumped back in front with another power-play goal 10 seconds into a two-man advantage. Hartnell scored his first of the series, taking a wide-open, far-post feed from Briere to give the Flyers a 2-1 edge.

The Penguins’ reclaimed the lead with a pair of even-strength, second-period goals, scored 3:38 apart.

Staal knotted the score with his sixth of the playoffs early in the second, beating Bryzgalov to the glove side with a wicked wrist shot during a two-on-one. Kennedy gave the Penguins’ the lead three-and-a-half minutes later with a cannonading blast from the top of the right circle, sending the Consol Energy Center crowd into a white towel-waving frenzy.

“It was loud and it was awesome,” Staal said of the largest hockey crowd in Consol Energy Center history.

“(Philadelphia) made a push, but Marc-Andre Fleury made some unbelievable saves.”

Philadelphia, the best road team during the regular season, has owned the Penguins at Consol Energy Center with a 7-1 mark entering Game 5, including a pair of come-from-behind victories in Games 1 and 2 of the series last week.

But the Penguins, who squandered leads in each of the first three games of the series, wouldn’t let it happen on Friday.

Now, they’re looking for another win in Philadelphia, an opportunity to send the series back to Pittsburgh Tuesday night for Game 7 and become the fifth team in professional sports to rally from a 3-0 series deficit.

The Flyers know what it’s like to be down 3-0 in a series and win. They did it two years ago in the Eastern Conference semifinals against Boston.

This is the fourth time in Penguins’ history they’ve trailed 3-0 in a series. The Penguins never survived long enough in each of those series for a Game 6 until this time.

The Penguins are hoping to make history of their own and complete a comeback against their cross-state rivals.

“It’s one game at a time,” Staal said. “We’ve been saying that for awhile now. We’ll go into Philly confident we can win it and go from there.”

NOTES: The team that scored the first goal lost all five games in the series… The Penguins are 2-5 in the playoffs at Consol Energy Center and 5-9 at home since winning the Stanley Cup… Flyers’ defenseman Nicklas Grossman missed Friday’s game with an upper-body injury and Penguins’ defenseman Paul Martin was out with an undisclosed injury. Flyers’ forward James Van Riemsdyk, out since March 1 with a broken foot, played in his first game of the series.

***In addition to his work here, Dan Scifo is the assistant sports editor for the Latrobe Bulletin. Follow him on twitter @DMScifo.