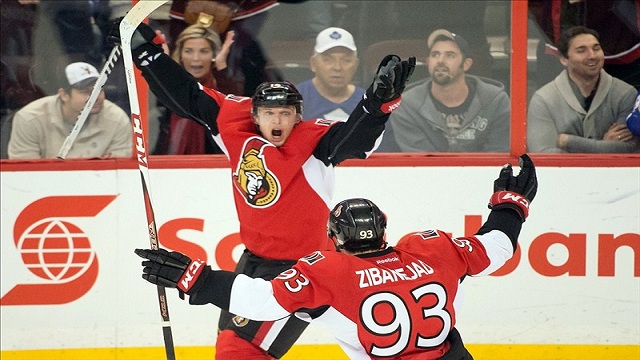 Al Willig give us an update on the Senators, who are very much alive and ready to make some post season noise.

When last I occupied this space, the Senators had their grave dug and were stuffed in a coffin.  Jason Spezza, the Senators leading point getter from the previous year, had gone down to a back injury and Erik Karlsson, Norris trophy winner and second leading scorer, had a “season ending” Achilles injury.  Since then, league leading goaltender, Craig Anderson missed 18 games with an ankle injury and Milan Michalek, their third leading scorer from a year ago, missed 27 games with various ailments.  At the time of the Karlsson injury, I was certain the Senators would not win 2 more games the rest of the year.  Afterall, how could a team that really was a couple steps below the elite teams in the league, lose that level of talent and expect to be competitive?

In a lesson on ‘you really don’t know what you don’t know’, the Senators have remained in the playoff race, although it is going to be touch and go for their final 7 games. After a 5 game losing streak, the Senators have won 2 straight to renew some faith in the faithful. What we did not know was how effective Ben Bishop and Robin Lehner really could be in net.  We also did not know that the young skaters called to step up and replace the lost fire power would be able to handle the added responsibility.  And we did not know that Paul MacLean was the exceptional coach that he is proving to be, although we had some suspicions of this.

Fast forward to today; Craig Anderson is back in net (Ben Bishop is in Tampa) and is regaining the form he showed prior to the ankle injury having shut out the Devils in their last match.  Michalek is back in the lineup and Karlsson, along with up and coming defensive stalwart Jared Cowen, who was also expected to miss the entire season, are looking like they will be ready to return in time for the playoffs.  In the meantime, Mika Zibanejad has come up from Binghamton and has 19 points in 35 games. Zibanejad is playing a very mature game for a 19 year old in his first year.  More and more, he is reminding me of Marian Hossa in his style of play.  He is a straightforward, bull rush power forward and his physical play will likely only get better as he gets more comfortable, Fellow rookies, Patrick Wiercioch, Eric Gryba, Jakob Silfverburg, and Andre Benoit all have performed admirably and gained invaluable experience playing added minutes and in all situations.  Kyle Turris, while not having the numbers you would like to see out of a top line center, has done all that is asked of him playing a role that is above his current stature.  All of this can only serve the Senators well in the long-run.

I was expecting this to be a growth year for the club, with the very real possibility they would miss the playoffs even under the best of circumstances.  The growth part is very real and the level of growth is off the charts.   The job Paul MacLean has done coaching this team should make him a shoe-in for the Jack Adams award.  This team is not without talent, but given the youth of this team and the talent missing from the lineup, I do not see how he can be passed over this year.  They were nearly buried and he has not only kept them above ground, they are very much alive in the playoff race.

This author has not added a biography. Meanwhile Al_Willig has contributed 5 posts. Click here to view them.