On April 22nd, during Game 5 of the Flyers/Devils Eastern Conference Quarterfinal series, Ian Laperriere blocked a Paul Martin slapshot. With his eyebrow.

On April 22nd, during Game 5 of the Flyers/Devils Eastern Conference Quarterfinal series, Ian Laperriere blocked a Paul Martin slapshot. With his eyebrow. It took 70 stitches to close the gash. This was the second time this season he sacrificed his face for the Flyers’ logo on his sweater. The first cost him 7 teeth and, 120 stitches or so later, he returned to the ice and finished the game.

Unfortunately, the eyebrow incident resulted in a mild concussion, blurred vision and a brain contusion, and will cost “Lappy” the rest of the playoffs.

On April 25th, I suffered a nosebleed (my first not induced by a fist). It started at 9:30 in the morning, just a drip. After several ‘pinchings’ and 3 hours of “What the…?”, I took a trip to the Emergency Room. After about an hour, I was on my way home with a new balloon up my nose.

It wasn’t long before I started leaking again, and after a call to the ER Doc who treated me, I was back to have the balloon adjusted.

Long story short, I needed to go back a third time for a 5 hour, and much more painful, attempt to stem the flow. It ended at 2 AM with a foam tampon insert doing the trick. It comes out today, and hopefully that’s the end of it. In the meantime, there has been major discomfort in my face and one helluva headache.

Apparently I’m no Ian Laperriere. I don’t suffer pain above the neck very well. A severe headache will relegate me to bed in a cool, dark, quiet room. A nasty toothache can have the power to immobilize me. Having teeth pulled just plain old sucks, but in the end it’s really just an ache that I can, for the most part, deal with. 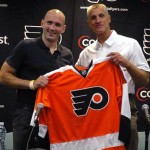 I almost didn’t get this entry written this week, since my concentration level was so low due to the pain in my head. The Spirit of Lappy got me motivated. I just couldn’t not do it.

Oh, and Lappy, if by some chance you happen upon this blog, get well soon. You are an inspiration to all who watch you play, and you epitomize selflessness and inspire us all to give it everything we’ve got in whatever we do. Take good care of yourself and hopefully we’ll see you back in the Orange and Black for next year’s run for the Cup.

** Tangent Man — Keith Filling… a fantasy and NHL hockey junkie who has a lot to say about the reality of life experiences, Scotch, hockey, music and the bane of being addicted to a fantasy game. Read more of his work over at his “Off on a Tangent” blog.