This past weekend, Cristobal Huet spent his day with the Stanley Cup in his native France, including the Eiffel Tower. 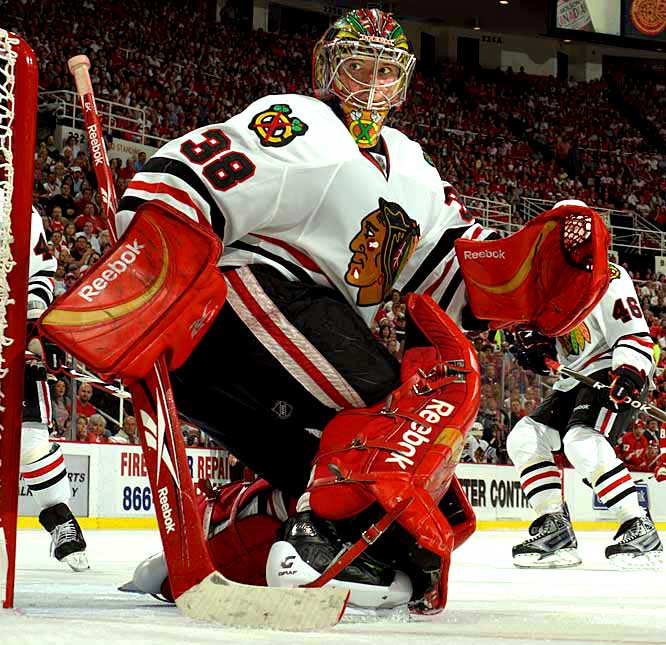 This past weekend, Cristobal Huet spent his day with the Stanley Cup in his native France, including the Eiffel Tower. It’s the first time he has won the Cup in his eight seasons of playing in the NHL. Though he only saw 20 minutes of ice-time during the Hawks’ playoff run, Huet started a career-high 48 games in 2009/10, and was victorious in 26 of them.

Unfortunately, it appears it could be the last time Huet steps on NHL ice for some time.

The Los Angeles Kings seventh-round draftee from 2001 took his time with HC Lugano of the Swiss Elite League before finally getting a crack in the NHL in the 2002/03 campaign. At the time, Huet was a serviceable backup behind the likes of Felix Potvin and Roman Cechmanek.

Huet didn’t get a legitimate shot to start in the league until after the lockout when he was traded to Montreal. He split time with Jose Theodore, but was easily the better goaltender with a 2.20 GAA and seven shutouts. Huet only played in 36 games due to injury.

Huet started in the playoffs for the Canadiens that spring, and performed admirably despite a six-game series loss to the Hurricanes in round one.

In the 2006/07 season, the Habs took a step back and barely missed the postseason. Huet had a very average year, posting a 2.81 GAA and just 19 wins as the team’s starter.

A year later, however, was Huet’s ‘coming out party’ between the pipes. For the first three-fourths of the year, he was a key part to the Canadiens being the leaders of the Eastern Conference. Then the Trade Deadline rolled around.

With Montreal in first place, I don’t think anyone could have imagined GM Bob Gainey trading its top netminder. But rookie sensation Carey Price was stealing minutes, headlines and the spotlight away from Huet, which ultimately led Gainey to dealing the Frenchman to a Washington club that was on the fringe of making the playoffs.

That’s when he played the best hockey of his NHL career.

The Capitals were one of the hottest teams in the league, but were in an uphill climb after an ugly start to the season just to get into playoff contention. In 13 regular season games with the Caps, Huet went 11-2 with a 1.63 GAA and .936 save percentage.

Whether he was motivated by the simple fact of getting dealt by a Cup contender or being in a playoff chase in which his team had to win nearly every game, Huet stepped up to the task at what was the most important time of the year for Bruce Boudreau’s Capitals.

It was a different story once Washington got into the playoffs as Huet wasn’t the same goaltender as he was down the stretch. They lost the series in seven games to the Flyers on a rather soft overtime goal from Joffrey Lupul.

But that didn’t keep Huet from cashing in on the subsequent July 1.

Shortly after becoming the toast of Washington for leading them to an unexpected playoff berth, GM George McPhee decided to go a different route in net. They opted to sign a cheaper goalie and Huet’s ex-teammate (Theodore).

That opened up the door to a new opportunity for Huet, who inked a four-year, $22.5 million contract with Chicago that same day. He and Brian Campbell were brought in to change the culture in the Windy City, as the two signings by then-GM Dale Tallon sent a message that the up-and-coming Blackhawks were going to be a force to be reckoned with in the near future.

Fast forward two years later. Huet had his fair share of ups and downs wearing the Indian crest on his chest. He was beat out by Nikolai Khabibulin and Antti Niemi, watching both go on to have playoff success in 2009 and 2010, respectively.

Huet posted a shoddy .902 save percentage in 89 games with the Blackhawks, even though his record didn’t reflect it (46-29-8). He especially drew the ire of fans when he let in this goal against Dallas last season.

Now with GM Stan Bowman and the ‘Hawks facing severe cap restrictions, Huet’s days with the organization are numbered. Chicago simply doesn’t have any room for his $5.625 million cap hit after dishing out hefty extensions to Patrick Kane, Jonathan Toews, and Duncan Keith.

Where Huet will play this upcoming season is anyone’s guess. There was a lot of thought not too long ago that he would still be paid the aforementioned salary in Rockford (Chicago’s AHL affiliate), and just not count against the Blackhawks’ cap.

Recently, though, those thoughts have shifted to him likely heading back to Europe on loan from Chicago. His wife is from Europe, and he has family over there as well. A return to the Swiss Elite League (where his career essentially started) looks like a logical destination at this point.

Huet’s career has seemingly been a roller coaster ride. One day he’ll look solid and nearly unbeatable in net, but giving up softies high-glove-side the next. One day he’ll be a starter, but the backup or even traded the next.

One of these days the soon-to-be 35-year-old Frenchman will be able to settle in and play hockey without distraction or pressure. It looks as though that day could be here sooner rather than later.