First off, the day started at 5:55am, or as I like to call it, way too early! I was packed and ready to go the night before so once I was finished up with my regular morning ritual it was off to the Globe Park and Ride. 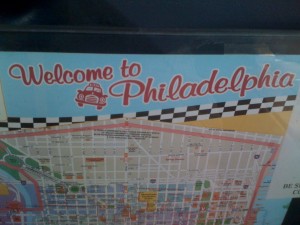 I wanted these updates be happening on an ongoing basis, but I have run into a couple of Internet issues while I have been in town. My AT&T air card that I pay $60 dollars a month for is not communicating with my laptop due to a driver issue and the hotel that I am staying in is not a hot spot… so, this update is coming to you live from the media work area of the Wachovia Center. As I type this, Pierre Mcguire is chatting with the great Kevin Allen two seats down — gotta love the Stanley Cup Finals!

On to the tales from day one…

First off, the day started at 5:55am, or as I like to call it, way too early! I was packed and ready to go the night before so once I was finished up with my regular morning ritual it was off to the Globe Park and Ride. There really is no other way to go to the airport. I mean they charge you close to $25 dollars a day to leave your majestic steed in the short term parking area, where as the Globe boys offer a coupon that can be printed that gives you parking for $5.75 per day! 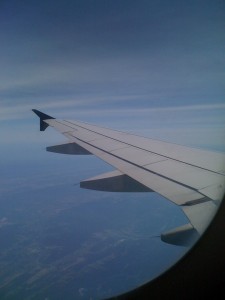 I arrived at the airport at 7:55 am for my 9:30 am flight. After sucking down a no name latte I was off the ground and headed to the City of Brotherly Love… on the plane I was seated next to a guy that is sort of torn in these playoffs. He works in sales and was heading into town to see a client who was taking him to last night’s game. His problems stemmed from the fact that he is originally from Chicago, lives in Pittsburgh, but was sort of forced to support the Flyers to keep his client happy. I guess you gots to do whatever you gots to do to close the deal… plus it isn’t to shabby to be taken to a Stanley Cup Finals game by a client. I always thought that the salesman is the one who is supposed to be doing that!

Once on the ground in Philly I immediately realized that I had stepped squarely behind enemy lines… however, I was welcomed with open arms. I have cultivated a fairly good relationship with Flyers Nation over the years and it definitely helped the cause. My days toiling in the comments sections of my old Flyers/Pens blogs have paid off in spades!

I made my way through the airport to the local cab stand. Unfortunately for me the driver I was lucky enough to get was being berated by the fellow who runs the stand… saying that the driver was surly during my trip to the hotel would be an understatement. He didn’t say two words to me the entire time…heck I wasn’t sure he even listened or heard my destination, but eventually he pulled into the Downtown Marriott.

I checked into my room and immediately noticed a problem. I got to guest room 336 to find that it was outfitted for a nursing conference yesterday afternoon. In the center of the room was a conference table, seating for 12, and notepads/pens for everyone! For a split second I thought that they just put me in a hospitality suite to wait for my actual room, but upon asking the front desk I found out that it was another famous snafu! Those things tend to follow me… I got the room situation squared away, which is very nice by the way, and was off to the Wachovia for the first time to pick up my credentials etc.

The first thing I noticed is that this town did a wonderful job of situating its sports arenas. There is a “sports complex” that contains the Wachovia Center, the old Spectrum, Citizens Bank Field, and Lincoln Financial Field. One stop shopping for the pro sports fan in you… the only drawback is that there isn’t much around the stadiums/arenas. In talking to some of the staff here I found out that the plan WAS to develop the area that the Spectrum currently sits on and add theaters, shops etc, but it has yet to happen… sounds a bit familiar doesn’t it?

I picked up my credential, but missed all of the skates and pressers due to my later arrival, so it was off to the transportation stand to wait for a shuttle back to the hotel. I needed to go and get ready for the game, since I had to be back at the Wach for 5:30 pm to meet Tom from Versus.com.

At first I was the only one waiting at the stand, but was soon joined by the great Craig Custance, John Buccigross and Barry Melrose. I have seen Barry in the flesh many times before, but let me tell you, that mullet was a thing of beauty this time around… especially when you mix it in with the strong “THE DUDE” goatee he is currently rocking. Though the heat was close to unbearable, Melrose was still wearing a tremendous black pinstriped suit. He had to be roasting, but he looked good doing it.

We all arrived back at the hotel and it was off to prepare for the game.

Stay tuned for part two of “day one” shortly! I didn’t realize the time and I have to run to a meeting…

Also, I will have a full photo album of this adventure available soon…