After finally arriving back at the hotel I had a quick meal at the league’s buffet with BD Gallof who is the owner and operator of www.hockeyindependent.com. BD and I have long been cronies going back to our Hockey Buzz days, but this was our first meeting in person.

Ok, so I am way behind on updating the travel log! I had an entire list of things that I wanted to do while I was in town and accomplished next to none of them. I didn’t get to see any historic sites, no tour of the greatest cheese steak places, but I did get to meet a ton of amazing NHL folk. Most of which I wouldn’t have had the chance to meet back home, so overall this has been a success thus far. 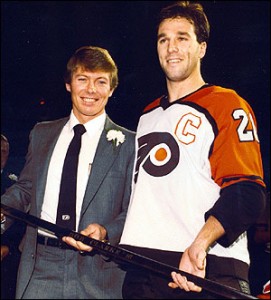 After finally arriving back at the hotel I had a quick meal at the league’s buffet with BD Gallof who is the owner and operator of www.hockeyindependent.com. BD and I have long been cronies going back to our Hockey Buzz days, but this was our first meeting in person. We had a great conversation over meat… beef tenderloin if I am not mistaken. We agreed to hook up later in the night following the game.

I went and gathered everything that I would need for the game that evening. A freshly charged iPhone, my packed to the gills computer bag with laptop, more wires than you can shake a stick at, and pens/paper. I was sort of harried in getting ready since I was scheduled to meet Tom Layberger from Versus.com at 5:30 and was running short of time. I was also waiting for a return call from the great Dave Poulin, who was joining me for the first half hour of the Versus.com chat for Game 3.

I was pretty damn excited about the opportunity to chat with Dave Poulin, as he was a long time captain of the Flyers and the current VP of Hockey Ops for the Toronto Maple Leafs. I was a bit nervous about how the whole chat was going to go because he wasn’t able to actually be in the chat with me, he was on my cell phone, which was attached to my ear. I had to relay all of the questions to him and transcribe his answers. Surprisingly it went very well! Poulin, who is a Notre Dame graduate, was very cooperative and patient with me. There were some lulls while I transcribed his answers, but we managed to make some small talk in between. My favorite moment came when I told him that I was a born and bred Pittsburgh kid and that he and his Flyers broke my heart on more than one occasion during the late 80’s. He answered, “That’s ok, when I went to Boston, your Penguins broke my heart two years in a row during the early 90’s,” a reference to the fact that the Penguins knocked the B’s out of the Eastern Conference Finals during their back to back Stanley Cup runs in 91-92.

I had to conduct the Poulin portion of the chat in the bowels of the Wachovia Center, because it would have just been too noisy to conduct a phone interview up in the press box. So the moment I finished with Dave, I had to make the whirlwind mad dash to the press box. I got on the elevator and arrived in a press box that looked a lot like the one that we are about to move into at the Consol Energy Center. It was huge spanning the entire length of one side of the building. It is also worth noting that they have soft pretzels in the shape of the Flyers logo… I will try to get a picture of that later tonight.

The game was full of excitement and Tom Layberger and I had a great time moderating the rest of the chat. Tom doesn’t moderate much, but adds to the flow by participating and having an all around good time with the folks in the room. It is always great to see how some of the media here in town is having trouble hiding the fact that they are rooting for the Flyers. There were more than a few shouts and cheers coming out for each Flyer goal all of which were followed by sheepish looks.

The crowd was completely amazing. Don’t get mad at me back in Pittsburgh, but that crowd was one of the best that I have ever witnessed in person. They were emotionally involved in every single aspect of the game and loud as hell. They knocked the roof off of the place when the Flyers hit the ice and even more so when they scored the OT winner. You all know that I am a huge fan of the emotion of the game and of the Stanley Cup Final, so witnessing it without any vested interest has been a great experience.

Once the overtime thrilled ended, it was back to the hotel for the NHL’s post game mixer. As I have reported in the past following the Penguins’ two runs, these folks know how to throw a party. Plenty of great food and drink to be had… for free! It is always a great experience to be in the same room with a who’s who of hockey media. BD and I took up residence in a booth got a couple of high end cheese steaks and relaxed a bit. Our time was limited because of the late ending game, but we managed to have some fun.

The two of us were able to hook up with Brandon Worley, who is the editor of NBC Sports’ www.prohockeytalk.com and we all chatted until the small ours over a couple of Budweiser products. Not my first choice, but that is all that was available to us.

My first evening in Philadelphia was a major success. Good people, great contacts made and I left feeling like this trip could be one of the most important ones that I have taken during my young career covering the game that I love…