The Bruins have one more player to re-sign before they virtually have their roster set for opening night – it’s restricted free agent Blake Wheeler. 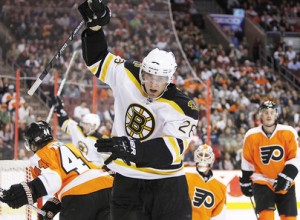 The Bruins have one more player to re-sign before they virtually have their roster set for opening night – it’s restricted free agent Blake Wheeler.  Last night, an arbiter rewarded him with a $2.2 million contract for one year.  Boston now has 48 hours to decide to accept the deal, do a sign-and-trade, or let him walk to free agency (they can also buy out a player in that time span).

According to Cap Geek, the B’s have just over $12,000 in cap space… that is obviously not enough to sign anyone.  This is where it gets interesting.

Wheeler had a wonderful rookie campaign when Boston was the best team in the east.  But when the team struggled to repeat their success from 2008/09, so did Wheeler (along with almost every other Bruin).  Two years ago, Wheeler was second in the NHL with a plus-36 rating.  He registered 45 points in 81 games, and was a great depth presence for the B’s.

Boston now must decide whether they’d be getting the Wheeler from 2008/09, or the one that disappeared for stretches at a time last year (38 points, -4).

There’s no doubting Wheeler’s talent.  The soon-to-be 24-year-old is 6’5” with a nice shot and room to grow his game.  He does need to use his size more and crash the crease more often, but he’s still learning and developing.  I mean, he was drafted fifth overall by Phoenix in 2004… which is a signal his great rookie campaign wasn’t necessarily a ‘fluke’.

Compared to other youngsters with his skill-set, $2.2 million is a pretty fair number… especially for a guy who could thrive in a contract year and a season after having some growing pains.  Clarke MacArthur was rewarded a $2.4 million deal in Atlanta through arbitration; Atlanta balked, and now he’s a free agent.

It is decision time for GM Peter Chiarelli… what do you do?

Do you let Wheeler walk to free agency?  I don’t think there’s any way Chiarelli would let him go for nothing.  If Boston wishes to part ways, I’m willing to bet one of the other 29 GMs would be happy to add Wheeler to their club.

Do you buy out someone to make room?  The only viable option would be Michael Ryder, who has one year and $4 million remaining.  Yet, even with buying out Ryder, the Bruins wouldn’t have enough cap room to fit Wheeler’s $2.2 million.  (Remember, Seguin’s entry-level deal and subsequent bonuses have to come into consideration, too).  I don’t think this is the direction they go in either.

Do you trade Marc Savard or Tim Thomas?  This could be the more likely scenario.  Savard is more likely to be traded than Thomas… simply because the goaltending market is even more irrelevant than it was back on July 1 (which is saying something).

It’s not like Savard is a cinch to be traded, though.  Some teams could be backing off because of the injury worries, even though his cap hit ($4.083M) is favorable considering his elite playmaking abilities.

If I were Chiarelli, I’d sign Wheeler to the arbitrated deal and hang on to Savard.  Where does that leave us?  Trading Ryder in a virtual salary-dump deal.  A team needing to get to the cap floor (Islanders?) could be willing take on Ryder if a draft pick is included, possibly being exchanged for a low-tier prospect.

That way you can hold on to your premier pieces while playing Tyler Seguin at wing in Ryder’s place.  If you need to trade Savard in the next year or two, let him rebuild his trade value – with Nathan Horton and Seguin on board, that shouldn’t be hard to do if he stays in the lineup – and let Seguin take the reins of top-line center when he’s ready.

With a healthy #91 in the lineup this year, the Bruins can go places.  The most likely scenario, however, seems to be Chiarelli trading Savard to a club looking for help at center.

It should be an interesting 48 hours in Beantown…