It was the worst kept secret in the National Hockey League and it became official this afternoon when Commissioner Gary Bettman announced that the Penguins would be hosting this year’s Winter Classic at Heinz Field on January 1st, 2011. 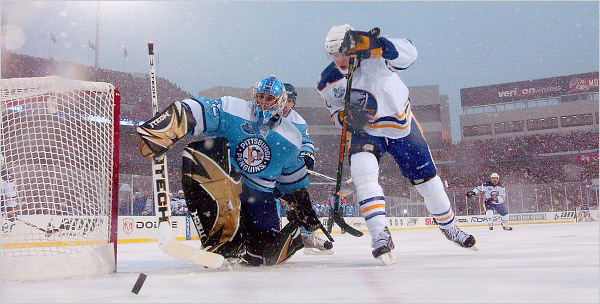 It was the worst kept secret in the National Hockey League and it became official this afternoon when Commissioner Gary Bettman announced that the Penguins would be hosting this year’s Winter Classic at Heinz Field on January 1st, 2011.

Personally, I am not sure I agree with the Penguins taking part in the league’s mid-season extravaganza so soon after launching the product three years ago against the Buffalo Sabres. I understand why the league wants them there, however there are 24 other teams that have never had a crack at participating in the event and it has got to rub them the wrong way. In fact, even the other team that is participating in this year’s event, the Washington Capitals seemed to take issue with the Penguins selection.

Nate Ewell, who is the Senior Director of Media Relations for the Capitals, said via his Twitter feed on March 28:

As I said above, I agree with Ewell’s comment, however the thought of covering an event such as this does get me pretty fired up…

I will have more on this subject in a blog that I am penning for Versus.com… it will be up later this evening. In the meantime, here is the official release from the team featuring reaction from Penguins’ president David Morehouse and some of Pittsburgh’s political leaders.

The Pittsburgh Penguins will host the 2011 Bridgestone NHL Winter Classic on Saturday, January 1 at Heinz Field, it was announced today by NHL Commissioner Gary Bettman.

“The Winter Classic has become an iconic event in its four years of existence, and the opportunity to host the game here in Pittsburgh, before a packed stadium of 65,000, is a tremendous honor for our organization,” Penguins president David Morehouse said. “With the cooperation of our friends at the Pittsburgh Steelers and Heinz Field, it will give us an opportunity to showcase the city to an international audience while celebrating Pittsburgh’s reputation as one of the premier sports towns in the United States.”

The 1 p.m. game will be televised nationally by NBC in the United States and CBC and RDS in Canada.

Morehouse said the Penguins are in the preliminary stages of planning activities surrounding the Bridgestone NHL Winter Classic and will work with the Mayor and County Executive, VisitPittsburgh, the Steelers and officials at Heinz Field to make the 2011 Winter Classic “a truly memorable event with a Pittsburgh touch.”

Details on ticket availability will be released by the NHL at a later date. All Penguins season ticket holders and suite holders will have the opportunity to purchase tickets. Fans can receive Winter Classic ticketing alerts and news updates by visiting nhl.com.

“We are excited that Heinz Field has been selected to host the upcoming Bridgestone NHL Winter Classic,” said Pittsburgh Steelers president Art Rooney, II. “It will be an exciting kickoff to the New Year and an opportunity to showcase our city and Heinz Field to hockey fans around the world. We welcome the chance to partner with the National Hockey League and the Penguins to bring Pittsburgh a major sporting event that will benefit the entire community.”

Local political leaders hailed the decision as yet another positive step for the city and the region.

“We are honored to welcome the National Hockey League’s 2011 Winter Classic and excited for yet another opportunity to showcase our City, thanks to the success of our great sports teams and one-of-a-kind fan base,” Pittsburgh Mayor Luke Ravenstahl said. “There’s no better way to ring in a New Year than to host this pre-eminent winter festivity, which symbolizes the resurgence of hockey in this great city. From the Penguins’ 2008-09 Stanley Cup championship season, to the opening of the CONSOL Energy Center next season, the Classic will be another historic highlight to continue the legacy of the current Pittsburgh Penguins team.”

“We are thrilled that the NHL has chosen Heinz Field as the location for the 2011 Winter Classic,” said Allegheny County Executive Dan Onorato. “It gives us the opportunity to showcase our great region, our passionate fans and our outstanding team. We are looking forward to once again having the eyes of the nation and the world on Pittsburgh.”

This is the third time in the four-year history of the Winter Classic that a team from Pennsylvania has participated (Penguins in 2008, Philadelphia Flyers in 2010), but this will be the first time the game has been hosted in the state.

“The Winter Classic is one of the great innovations the NHL has made that’s really boosted the game’s popularity and has been really well-received by fans,” said Pennsylvania Governor Edward G. Rendell. “The fact that it will be played in Pittsburgh – in our very own City of Champions with our very own 2009 Stanley Cup champs the Pittsburgh Penguins – is really exciting. It’s a great testament to the regard the league and fans have for the team and the city.”

Having this unique platform to showcase the city and the region is especially exciting to Joseph R. McGrath, President and CEO of VisitPittsburgh.

“This presents yet another tremendous opportunity to showcase Pittsburgh and to illustrate why Pittsburgh was named both #1 Best Sports City and America’s Most Liveable City,” McGrath said. “We’re certain that Pittsburgh’s incredible fan base will be eager to witness what will be a tremendous game. And, we believe, they will come from all over to be a part of this momentous event. Another feather in Pittsburgh’s cap.”