A collection of news and notes as the Penguins head into their clash with the Columbus Blue Jackets tonight. 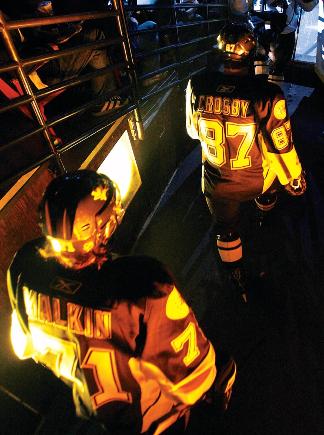 As the afternoon winds down and we get a bit closer to the Penguins match-up with the Columbus Blue Jackets tonight, I figured I would hit you with a collection of news and notes to get you ready. Before we get started, I will be making my return to the CONSOL Energy Center tonight for the game, my first since before All-Star Weekend. I had been out since Raleigh and am finally feeling a bit better. Follow me here and at Twitter for updates live from arena.

First of all, there is not much to report on either of the Penguins injured superstars. Sidney Crosby is still out of town visiting with his family, though he is expected to return to the Burgh at some point this week. Crosby is still at least 7-10 days away from resuming hockey related activity and most would have you believe that is a bit optimistic. Many close to the situation feel that he will be out of action until at least March.

Here is Dan Bylsma’s latest on the situation:

“The schedule with Sidney, we thought he would return sometime this week. There wasn’t a definite date or definite day. Right now, I haven’t had a lot of contact. He’s in contact with our trainer just to let him know how he’s feeling and so forth. There really isn’t a time frame as far as we’re concerned at this point, of getting him back into town and any kind of timetable.”

It is also worth noting that Dan Bylsma quickly shot down talk about Crosby being out for the remainder of the season. The Penguins’ coach did admit that when they were told that Crosby suffered a mild concussion that they had anticipated him to have been back by now, but that they are still just proceeding with caution and hoping to have him back at some point in the near future.

As for Evgeni Malkin, he is still likely to miss the remainder of the season with two torn ligaments in his knee. The team is waiting for the swelling in the knee to go down so that they can get a better feel for the damage and determine a course of action for repairing it. Malkin is thought to need at least six months to recover from the injuries that he has incurred.

Here is the latest from Bylsma on the Malkin situation:

“Given the severity of the injury right now we’re taking some time to let his knee calm down a little bit, get doctors’ opinions and options for what he has going forward. It’s not a lot of urgency at this point in time to rush into a certain decision.”

The silver lining in the Malkin injury is two-fold. First of all, they can do whatever is needed to get his other knee completely healed up, giving him two good wheels for next season. The next is that Ray Shero now has Malkin’s salary available to him to swing a couple of deals at the trade deadline.

Personally, I don’t see him making a huge a splash. The team is winning game now on the power of its great penalty killing and team commitment to defense. They are also getting great goaltending and contributions from up and down the line-up. Look for him to make a move that isn’t all that dissimilar to those he has made in the past – a guy who fits the system and is willing to tow the company line. Don’t look for him to upset the apple cart, as they don’t have a ton of roster or salary flexibility moving forward. A pure rental is what you will likely see, unless you see some kind of youth for youth deal.

A couple of guys to keep an eye on:

Alex Kovalev – his best years are behind him, but it is worth noting that those years did occur in Pittsburgh. He is also looking a lot more motivated over the past couple of weeks… a sure sign that he wants to convince a GM to take a chance on him not only at the deadline, but for next season. What better way to open some eyes than to come into a situation like Pittsburgh and help them to a long playoff run.

Jason Arnott – Arnott is unrestricted after the season and for as well as the Devils are playing right now, they are out of it for this season. He wants another chance at the Stanley Cup and he would look pretty damn good behind Crosby and Staal in the Penguins line-up. He is capable of playing the power play, is a leader and can kill penalties.

I will hit you with a couple more potential targets soon…

Did you hear about Mike Rupp buying a beer for a fan a couple games back? Apparently Rupp accidentally forced a fan to spill his pricey CONSOL Energy Center beer and felt bad about it. He had a trainer go to the room and fetch ten bucks out of his wallet along with a puck. He wrote a note of apology, attached the ten and tossed the puck over the glass to fan. I knew I liked that guy… (Thanks to WPXI TV in Pgh for the story)

The Penguins and the American Red Cross will host a blood drive on Sunday February 27th from 9:00am to 3:00pm at the CONSOL Energy Center. See the official release below…

Dustin Jeffrey has been a pleasant surprise to this point in the season. Not only has he logged a ton of miles back and forth between Wilkes Barre-Scranton and Pittsburgh, but he is showing everyone involved that he is ready for prime time. Yes, he has had a couple of ups and downs on the ice, but he has proven that he is capable of playing full time in the NHL. Though he might not be a mainstay this season, his days of shuttling back and forth are almost behind him.

I haven’t been near as impressed with Eric Tangradi as some have been. I just don’t think he is ready for the NHL yet… that isn’t popular amongst his fans, but it is true. He is occasionally a step behind the play and has started taking penalties because of it. His stick is parallel to the ice on far too many occasions and the officials are watching for it. Look for him to be amongst the first guys sent down as the team gets healthy.

Stay tuned for more later from the CONSOL Energy Center…

PITTSBURGH — The Pittsburgh Penguins and American Red Cross will host a blood drive on Sunday, February 27 from 9:00 am to 3:00 pm at CONSOL Energy Center.

The Score One for Life Blood Drive has been a Penguins’ commitment to the local community since 1992.  Penguins’ drives have yielded over 10,000 registered donors, whose blood donations have helped up to 30,000 patients in need.

The drive is traditionally scheduled during a time when blood is greatly needed.  Winter storms coming through the area this year have left behind hundreds of cancelled Red Cross blood drives and thousands of lost blood donation opportunities.

Donors will receive a jersey-style t-shirt, while supplies last, and are eligible to win Penguins memorabilia.  Fans will also have the opportunity to meet Penguins’ broadcasters and alumni during the drive.

Individuals who are 17 years of age (16 with parental permission in Pennsylvania), weigh at least 110 pounds and are in generally good health may be eligible to donate blood. Donors 18 years of age and younger also have to meet certain height and weight requirements. Individuals should bring their Red Cross blood donor card or other form of positive ID when coming to donate.

Complimentary parking is available in the South Lot or East Lot.  Donors will enter CONSOL Energy Center at the Verizon Gate on Centre Avenue.

Song O’ the Morning to you… though it is the afternoon! I usually do this on FB, but decided to start posting them here. Van Halen – Dreams