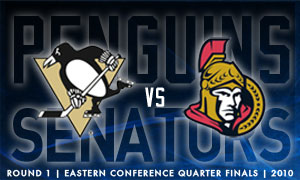 Just wanted to give you a handful of afternoon notes…

First of all, as I mentioned in the Around the Net blog, the Senators have decided to go with Pascal Leclaire tonight against the Penguins. Not sure that I agree with the move, considering that you might be alienating your goalie of the future. However, Elliott’s numbers are not the kind that scream out “stop the bleeding” in a must win game. It is worth noting that Leclaire’s numbers weren’t exactly stellar in his mop up duty in game 4 either… so it has become a pick your poison kind of situation for the Sens… 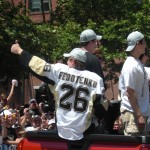 Tyler Kennedy will indeed miss tonight’s game. He will be replaced with Ruslan Fedotenko, who has been a healthy scratch since game 1. Now is the time that he needs to step up… sure he had a horrid regular season, but Shero kept him around for this time of year.

The Penguins line combos in practice were as follows…

Jordan Leopold is feeling much better and is anxious to get back on the ice with his teammates. He is definitely still considered day to day, but should be able to return soon enough — great news, especially when you go back and watch how brutal the hit looks in replays.

Interesting to see John Tavares left off of the list of Calder Contenders… however, it is tough to argue the credentials of any of the three guys who were selected as finalists. Tyler Myers, Matt Duchene and Jimmy Howard were clearly the three best youngsters in the league this year and all were instrumental to their team’s successes. If I were casting a ballot…it would go to Tyler Myers… he has done some amazing things for the Sabres. Defensemen have one of the toughest transitions to the pro game and he has done it magnificently!

I am sure you guys are fully aware, especially if you follow me on Twitter or Facebook, but I am working for Versus.com during the playoffs. That coverage has left me neglecting my own responsibilities here at FTP a bit… though I have still been staying on top of things for the most part, you can get even more by reading my blog over at Versus.com.

Metz’s blog over at Versus.com.

There are pre and post game blogs for all games in the Pens/Sens series… I also ask that you check out the chats that I have been moderating for Versus. I have run four or five of them thus far and we always have a great time. I will be chatting live from Mellon Arena tonight…so if you aren’t at the game or at the Big Screen, please join me here.

Metz’s Chat over at Versus.com.

More in a bit!