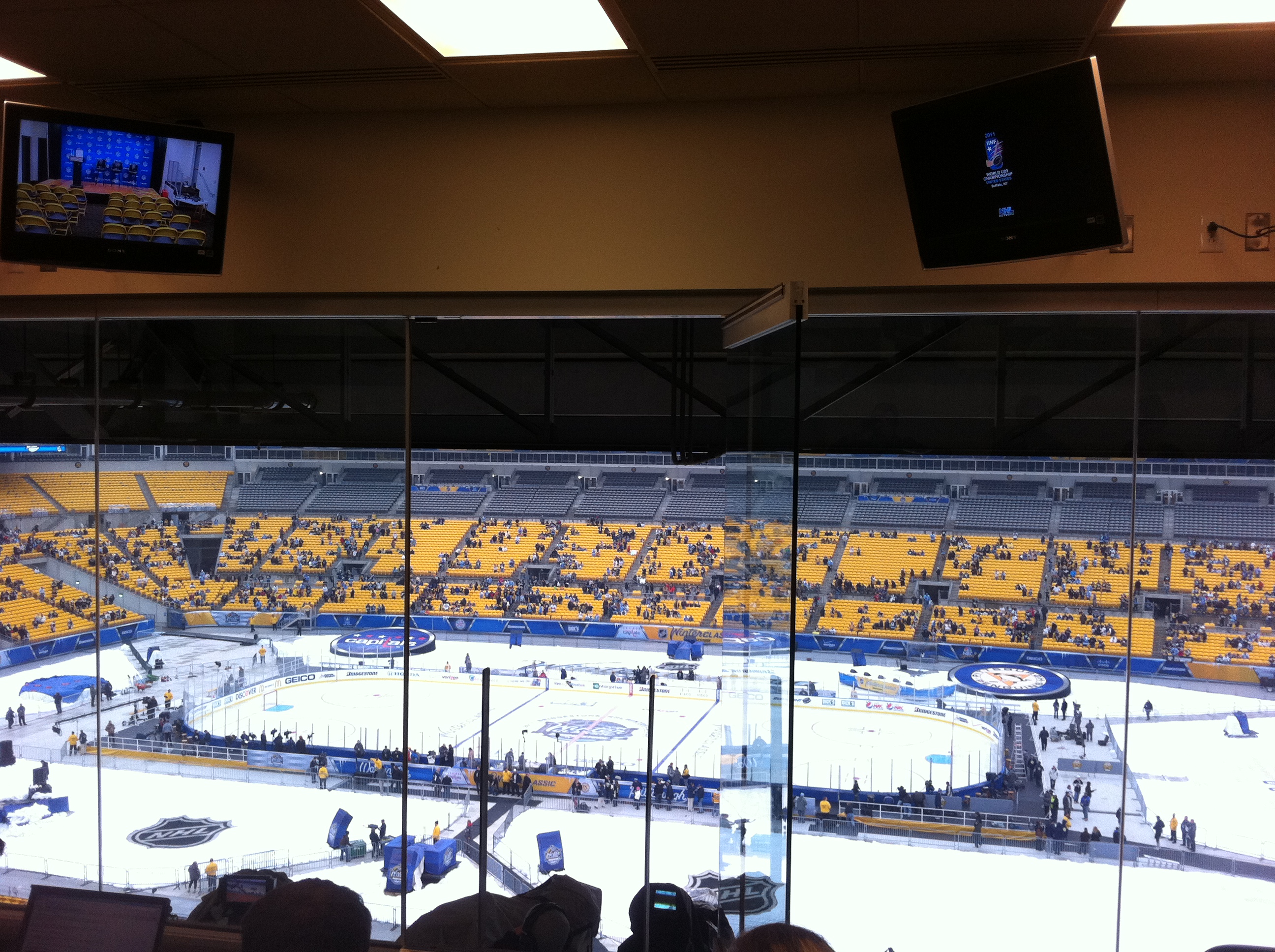 In what has already been an epic week of events, the Winter Classic Alumni Game is finally upon us. It all started with an up close and personal look at the rink on Wednesday, it continued with a once in a lifetime chance to skate on the ice yesterday and now we get to see Mario Lemieux, Peter Bondra and some of the best all-time greats from both the Capitals and Penguins impressive stables of former players take the ice once again.

Of course most in Pittsburgh (and let’s face it, the league) are anxious to see number 66 take the ice, as it hasn’t happened in a public setting since his final game back in Sidney Crosby’s first season in the league. He will most likely be reunited with several of his former line-mates, as both Kevin Stevens and Rick Tocchet are playing is this game. I was fortunate enough to see most of the members of both alumni teams entering the building.

I had just entered Heinz Field and I headed towards the interview room. Nothing was going on there, but it just so happened that the player transports must have arrived, as they all started filing past me. I was up close and personal with Ron Francis, Craig Simpson, Rick Tocchet, Larry Murphy, Paul Coffey, Bill Guerin, Gary Roberts, Don Beapre, Peter Bondra and several others. It was a definite right place, right time moment.

Though I am pretty fired up for tomorrow’s game, this is the one that I have been more than a little fired up for. You have all heard me mention being a fan of the game since the age of nine years old and these are the guys that I grew up on. Many of these players were on their respective teams during the mid to late 80’s and early 90’s — a time that I didn’t little other than watch this wonderful game.

I will be bringing you updates as the game rolls on, so please join me here. There will be availability for the Alumnis followed by practices with the current day Penguins and Capitals later today. I will have thoughts and reactions from all of them on an ongoing basis.

The teams have just taken the ice… the Capitals first, then the Penguins… the Caps were greeted by boos, while the Pens were greeted with cheers. After all of the other players had taken the ice the Penguins played a clip of legendary public address announcer John Barbero introducing “Penguins captain Mario Lemieux” as Le Magnifique took the ice. A chill inducing moment…

16:51 remaining in the first period. Mario Lemieux started the game flanked by Kevin Stevens and Bill Guerin. Gilles Meloche has already made a couple of saves…

The Penguins draw first blood on a goal by Robbie Brown, assisted by Mario Lemieux… wow… there is a combo we haven’t seen in 20 years!

No windmill though… maybe we will get another shot at seeing it!

The Caps have tied it up as Peter Taglianetti taps one into his own goal off of a Washington pass into the slot. The Tags redirect caught Gilles Meloche off guard… goal credited to Alan May.

The Caps have quickly taken a 2-1 lead on a goal by Paul Mulvey from right in front. Paul Coffey couldn’t get the defensive coverage on him and he knocked it home.

One of my all-time favs Rod Buskas just knotted the game at 2s. He took a pass at the middle point and let a shot fly that evaded Don Beapre.

Craig Simpson has put the Penguins ahead 3-2… he took a nice no look, drop pass and cruised down the right wing, before lashing a shot past Beapre…

I have to say that Paul Coffey could still help someone’s power play… he is dancing around the blue line and making plenty of plays from his point. Tremendous!

The Caps answer the bell and quickly knot the game back up at 3… as Phil Bourque just said in an on ice interview, all offense in this one. The goalies are being left out to dry! Mark Lofthouse on the goal…

Dave Hannan just went for the Sidney Crosby tip from the side of the net, unfortunately for Dave, the Beapreying Mantis was up to the task!

Coffey just went on one of his patented end-to-end rushes, though he wasn’t rewarded for his efforts. It was amazing to see him turn on the jets though! Went around a few Caps in the process too!

Mario being interviewed by Potash… “You’re one of the all time greats… I don’t think you will ever lose your legs… but, how are the legs?” Mario: “The legs are no good! (laughing)”

Frankie P is now in net for the Penguins…

Gary Rissling was just called for interference. The first penalty of the game… awesome seeing him assessed a minor in a Pens sweater again!

Forgot to post this earlier due to a page loading problem… Paul Mulvey scored his second goal of the game to put the Caps ahead 4-3 prior to the penalty.

Ron Francis just missed a glorious scoring opportunity right in front of Beapre… (though it might have been Gary Roberts) I am having some trouble seeing who is who, especially with the same numbered guys… He took a rebound and went forehand to backhand, but couldn’t push the puck past Beapre…

The sun has moved in at Heinz Field and it looks amazing! The players are casting shadows on the ice… it really looks like a game of shinny now! 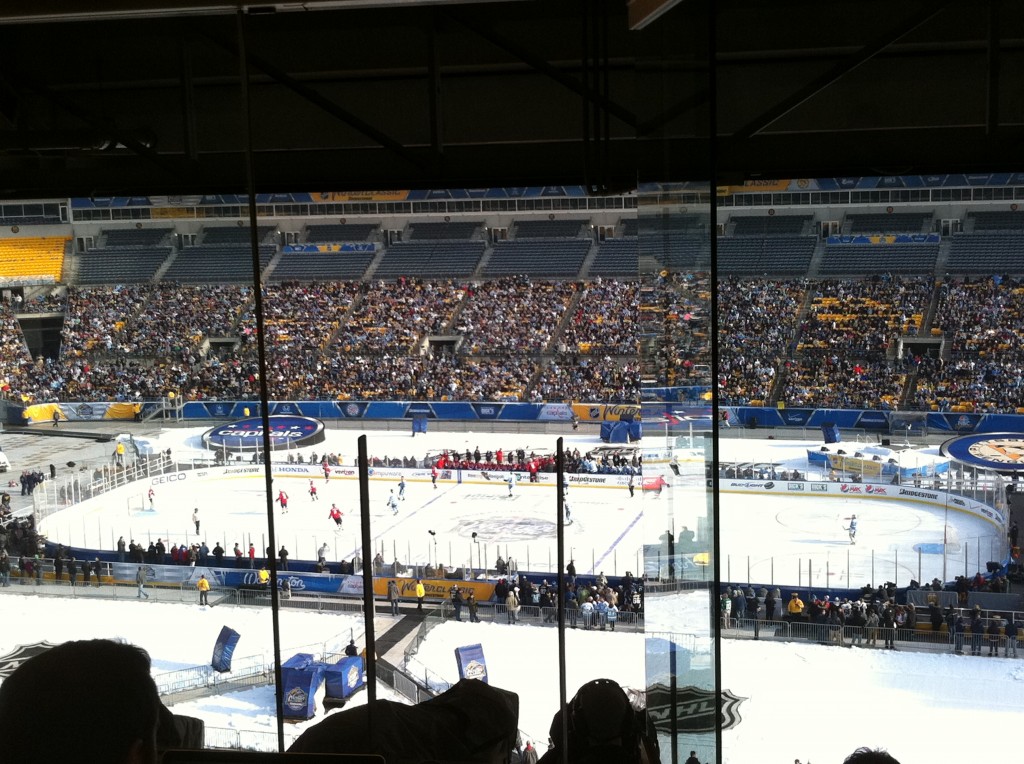 The Penguins will go to work on the power play…

It took some effort, but the Penguins finally cashed in on the power play… Ron Francis knocked the puck home off of a pass from Larry Murphy. Mario picks up the second assist…

The odd man rushes are coming at a feverish rate!

The Penguins just cashed in again, but it was after the whistle had sounded due to goaltender interference.

The Caps have again tied this game… the two sides just continue to exchange goals!

This time it was Penguins killer Peter Bondra!

The game ends in a 5-5 tie… sort of appropriate for the type of game that was played. Back and forth the entire time…