“Don’t worry. As long as you hit that wire with the connecting hook at precisely 88mph the instant the lightning strikes the tower… everything will be fine.” 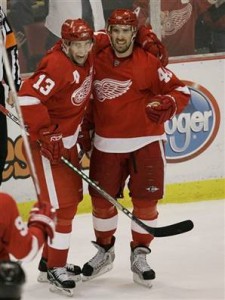 “Don’t worry. As long as you hit that wire with the connecting hook at precisely 88mph the instant the lightning strikes the tower… everything will be fine.”

The hook seemed to make a perfect connection sending the Penguins back in time to the scene of their Stanley Cup triumph back in June, but everything was not fine.

Rather than resembling that fateful summer night — one in which they played an amazing team game, outscored, outhit and outplayed the Red Wings in almost every facet of the game, it looked more like they had arrived in 2008.

Last night’s debacle could easily have fit into the Penguins’ 4-2 series loss to the Wings in the Stanley Cup Finals two years ago.  At almost no time during the game could you say that the Penguins were the better team and that should scare the heck out of them.

I see all of the Facebook posts and twitter comments saying that this was a meaningless game and the Wings have no reason to gloat.

A late March game against the team that you have seen in the past two Stanley Cup Finals and could potentially see again this season is pretty damn big. Especially when you have only nine more games to tune for said playoff run.

Even bigger when it comes on the heels of everyone under the sun pointing out the team’s flaws and inconsistencies…this should have been a statement game. One in which the Penguins proved that when they are zoned in and playing their game, anything is possible. That wasn’t the case and I hope that it serves as an eye opener for everyone in the Penguins room.

Don’t get me wrong, the sky is not falling. However, it is hanging precariously close to the edge.  The inconsistency that we talked so frequently about this past weekend was again on display in Detroit and the Penguins never found a way “to get to their game.”

Sure… they are still very much competing for an Atlantic Division title and lingering near the top of the Eastern Conference standings, but their effort just hasn’t been good enough. The only “elite” team that they have found a way to consistently compete with in the East is the Buffalo Sabres, going 3-1-0 against them. But a look at the rest of the conference heavies is a bit disheartening, 0-8 combined against the Capitals and Devils.

Sure, you can talk the talk about them “turning it on” in the playoffs, but those words don’t hold mustard…especially with nine games left in the season. The Penguins have been known to “turn it on” over their last 20 games, or in March, but they have yet to limp into the playoffs in any year since they have been back in them.

If nothing else, last night’s 3-1 loss to the Wings served as a reminder of how short a Championship window can stay open. I would hate to see the Penguins allow theirs’ to slide closed because they aren’t playing up to their capability.

Sergei Gonchar is the anchor of their blue-line and he is playing some of the least effective hockey of his season. Last night he singlehandedly allowed the Wings to pick up two goals — the first was a nice individual effort by Valtteri Filppula, but Sarge didn’t do much to make it hard on him. He didn’t take the body, nor get his stick in position to defend the Wings’ forward. Filppula got his shot away and through Gonchar and before the veteran d-man could recover the Wings had one on the board.

Whether Marc Andre Fleury should have made the save is debatable, but I am not blaming him. Sarge needed to curl Filppula off on the play.

The second goal was even worse.

Gonchar lost Hank Zetterberg in the slot, which is akin to asking “Al Bundy” about his days at Polk High…he scores every time. The bad thing about this play was that it looked as if the Penguins as a team had heard a whistle. They all stopped moving, allowing Zetterberg to score one of the easiest goals of his career.

Once in that two goal hole, they might as well have called the rest of the game. Sure the Penguins did muster a goal, but they never looked as if a comeback was going to be possible. Their heads were hanging and they didn’t same to have an answer.

They did get their usual late game rally going, peppering Jimmy Howard with shot after shot, even hitting the post twice, but it was too little too late. This group is far better than they played but you don’t win games on paper.

The road gets no easier with a trip to Washington lingering on the horizon. Surprisingly the team was again given today off.  Really? Not exactly how you would expect them to work through went happened last night. But I am not paid to make those decisions. I really hope that they are ready in what is sure to be looked at as a measuring stick game tomorrow night.