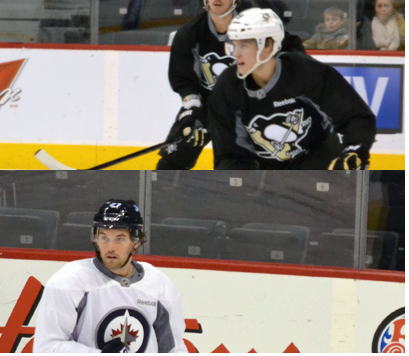 Beau Bennett will face former Penguin Eric Tangradi when he makes debut against the Jets tonight.

Its official, Beau Bennett will suit up for his first National Hockey League game tonight in Winnipeg. He is slated to start the game on the third line, but it wouldn’t be shocking to see him get shifts with either Malkin/Neal or Crosby before the end of the night.

As I mentioned in my column in the Beaver County Times today, Bennett is pretty excited about the opportunity.

“I will be in the line-up tonight,” Bennett said following the team’s skate in Winnipeg this morning. “I don’t know exactly the role or where exactly I’ll be so I’m really excited about that.”

Both coach Dan Bylsma and general manager Ray Shero have gone on record as saying that they don’t want to rush their prized prospect, which is why you’ll see him take those shifts on the third line. Bylsma did say that he expected Bennett to skate with the second power play unit right away.

Our pal Russ Cohen of Sportsology spends a great deal of time monitoring prospects. He had this to say about Bennett this afternoon on Twitter.

“Bennett is exceptional on the power play in regards to moving the puck. Very mature. Really like his game.”

Bennett’s main issue this evening might be the butterflies in his stomach, as he had a bit of a nervous twinge in his voice while talking to reporters today. Taking the skate was definitely a good thing for him though.

“It was good to get out there and get a feel for the puck and get the legs going a little bit,” Bennett said. “I am sure it will be different come game time but it felt good to be out there.”

He found out following the skate that he would indeed make his debut tonight.

“I came in here and if I didn’t play, it’s still a learning experience,” Bennett said. “He told me after practice and I’m definitely excited, let my parents know to get the family together and watch.”

Tangradi’s not bitter or is he?

You could say that the Penguins traded Eric Tangradi to the Winnipeg Jets on Wednesday not for a seventh-round draft pick, but Beau Bennett. Cleaning up a bit of a logjam in the forward ranks opened the door for Bennett to be recalled from Wilkes-Barre/Scranton and enter the line-up.

Coincidentally the first opponent that the Penguins will face since making the deal is Tangradi and those same Jets.

An exhausted Tangradi met with reporters following his first skate with his new mates and immediately compared playing the Penguins to “seeing your ex-girlfriend in the bar the next night.”

Tangradi, who started the season skating on a line with Evgeni Malkin and James Neal, is excited to be getting a second chance with the Jets. He will skate on a line with Olli Jokinen and Kyle Wellwood this evening.

“It’s up to me whether I stay there or not. It’s an opportunity I didn’t get in Pittsburgh.”

The 24-year-old sees his “chance” with the Penguins’ dynamic duo significantly different than Penguins’ management might.

“Sometimes I felt like I had a short leash out there,” Tangradi said. “I felt like playing games, I was playing just not to make a mistake, instead of getting to my game.”

He never really seemed to get to his game with the Penguins and that is why he is no longer with the team. The Philadelphia native feels that that was more a matter of how he was handled than anything to do with his actual skill set.

“I think that’s what held me back and prevented me from really getting to my game and doing the things that I did to get me to the NHL.”

Tangradi has a big chance in front of him with the Jets.

Shero’s parting words regarding the player seemed to point to the fact that he is largely viewed as a role player who would have to earn a spot in a NHL team’s bottom six, but he is getting that opportunity with a couple of offensive players on the Jets’ second line.

Tangradi will also have to deal with the fact that he is playing a group that he has spent the better part of four years with.

“I have the mindset — no friends tonight. I’ve got new teammates on my side, I just have to try to play my game and be physical.”

He feels that playing a vertical, physical game will help him make the most of his situation.

“If I just focus on playing my game — play north-south — hopefully good things will happen.

“I’m just looking forward to getting an opportunity and playing my game.”