I will be providing the news, notes and analysis of the Penguins/Flyers series, while Metallica provides the soundtrack… 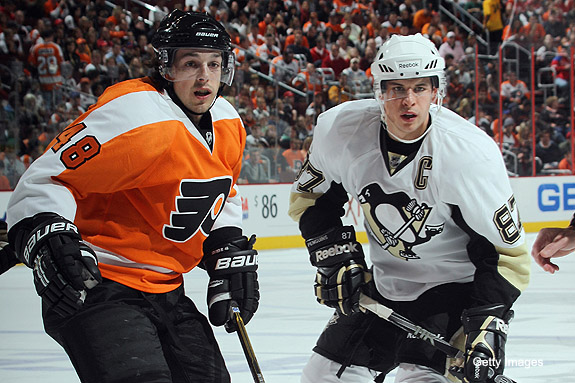 Ok… since I didn’t have time to write a proper preview for Penguins/Flyers series for FTP due to a number of other obligations, I figured that I would parade out a piece that I wrote about the two teams following the Penguins 4-2 series victory over the Flyers back in 2009.

It is a piece about Metallica, the Penguins/Flyers and the fury, adrenaline, blood, sweat and tears that go into any game that these two beasts of the east play. It doesn’t really matter if it is a season opener, a mid-season match-up or one that will determine who takes the next step towards hoisting the Stanley Cup, the game is sure to leave both teams “Broken, Beat and Scarred.”

The Metallica song “Broken, Beat and Scarred” has long served as a soundtrack to any game between the Penguins and Flyers, at least in my world, as its lyrics perfectly captures the essence of Penguins/Flyers.

Hearing the tune and the above lyrics last Saturday as the song blared during the warm-up prior to the Penguins’ 4-2 victory over the Flyers in their regular season finale got me thinking about an interesting idea for this series. Why not use the Metallica catalog as a soundtrack for each game of this knockdown, drag out… sure I will share thoughts, analysis and much more from each game, but why not mix in tunes from the extensive Metallica catalog to help tell the story.

Many of you may have mixed feelings on the band, but they have long been a favorite of this kid and I recently rekindled my love affair with them. Sure, I wasn’t thrilled with some of the albums that they released over the years, but at the end of the day, they are still Metallica and seeing them at the Big Four at Yankee Stadium this summer brought be fully back on board.

The music sounds amazing when it is played in the arena, it fires everyone up and I am hoping it can do the same thing here at the blog. Obviously this piece will kick things off with “BB&S,” as it is going to be the “header” for the entire project. You will likely see and hear it mentioned throughout the series along with a lot more…

I will be on twitter this evening live from the CEC, doing live game reports for TSN 1050 in Toronto, and hitting you with a recap later chock full of Pens, Flyers, News, Notes and of course Metallica. In the meantime, enjoy the piece below as a tune up. Though it was written about a series that was played several years ago, it still holds up remarkably well in telling the story of the Penguins season and what they are sure to go through against the Flyers in this series.

Metallica tunes are a staple of any National Hockey League game, especially in Pittsburgh where the Penguins have long used the band’s music to pump up the Mellon Arena crowd. I will be the first to admit that it does work too!

When the team’s in game entertainment folks were putting together the playoff open for this year’s run, they again went to the Metallica catalog and the song they chose couldn’t have been more appropriate. It spoke to the trials and tribulations of the season that was and also became the perfect accompaniment to the Penguins opening round series against the Flyers. They chose “Broken, Beat & Scarred,” which appears on the band’s newest album “Death Magnetic.” The song’s opening lines are as follows:

In listening to that song and hearing the above lyrics I couldn’t help but think of the ups and downs of this season, as well as the ups and downs of this series. Heck, it even applied to the clinching game yesterday afternoon in Philadelphia. The Penguins found themselves in a 3-0 hole — the “you fall”, and fought back for the 5-3 victory — the “rise again.” The entire series being the “what don’t kill you make you more strong.”

These Penguins have shown throughout a very tough season and tougher series against the Philadelphia Flyers that they are a resilient bunch. They fought hard and didn’t get too up or down with any of the results. That is exactly how you need to be during the playoffs…dwelling too much on one outcome or another could derail your chances in the next game. You need that mindset when playing huge game after huge game every other day for two and half months.

Before I talk about some specific players and stats in this series, I wanted to float a theory that I had in regard to this Penguins team. Sure, there are some new components, but the core is largely the same one that went to the Stanley Cup Final last spring. This Flyers series might have been the best thing that could have happened to them, because it forced them to gain an appreciation for how hard it is to win in the playoffs.

The Eastern Conference came far too easily for them last year. They steamrolled through each round losing only 2 games en route to the final. Having gotten to that point easily might have had them a bit unprepared for what they experienced in Detroit during games one and two.

The adversity that they faced in this Flyers series just might have brought them down to earth a bit. Not that they were not taking it seriously, as every player has said and done the right things to this point, but they might have had their eyes opened and realize that they have got to go all blood, sweat and tears for 60+ minutes in each and every playoff game if they want to get to the promised land.