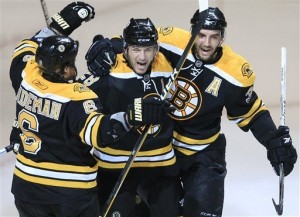 The Penguins clinched home ice advantage for the Eastern Conference Semi Finals with the Boston Bruins series clinching victory over the Buffalo Sabres this evening. The Penguins are now the second highest remaining seed in the conference and would have home ice over every remaining team aside from the Washington Capitals.

The Birds are still waiting to see who they would play in the aforementioned Semi Finals, as there are a couple of different options ahead of them. A Montreal victory would give the Pens home ice for the rest of the Eastern Conference playoffs and a second round date with the Canadiens. A Washington victory sets the Penguins up for a date with the Boston Bruins.

Personally, I am looking forward to a match-up with the Bruins. First of all, they look like a different team than the one that didn’t show up in the last meeting between the two teams. We would also have all of the built in intrigue that comes with Marc Savard getting back on the ice against Matt Cooke and the Penguins.