Paul Ladewski should probably stick to writing about baseball, as a hockey piece he published yesterday afternoon has him in hot water with Penguins fans. 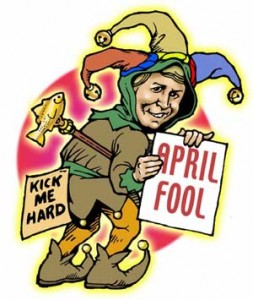 Paul Ladewski, who is apparently a 23 year veteran of the Baseball Writers Association of America (according to his Wikipedia page), should probably stick to writing about baseball, as a hockey piece he published yesterday afternoon on http://piratesreport.com has him in hot water with Penguins fans.

Ladewski is the current editor of the Pirates Report website. He took over for the great John Perratto upon the latter’s termination for telling it like was about the “Battling Bucs.” Coincidentally, the Pirates Report is owned “by Ogden Newspapers, which is controlled, if not owned outright, by the Nutting family.” (Thanks to Bob Smizik’s blog for the info.)

If you didn’t know, the Nuttings own the Pittsburgh Pirates… Yep, the same bunch that has 17 consecutive losing seasons under its belt and is well on its way to its 18th.

Upon reading the article, which has since been removed from the Pirates Report site, I had to check the calendar… was it April Fool’s Day? Could it have been a prank piece, tugging the collective leg of not only Penguins’ fans but Pittsburgh fans everywhere?

Nope… it was May 19th and it seemed to be a legitimate piece trying to point out ALL of the Penguins’ failings over the past five seasons.

Ladewski attempted to paint four consecutive trips to the playoffs, two Stanley Cup Finals appearances, a Cup victory and this year’s elimination as a failure that is on par with or worse than that of the Pirates’ 17 losing seasons.

Truth be told the guy doesn’t even have his facts straight, as he points out that the Penguins “have gone belly-up in the playoffs for the fourth time in five years in the Sidney Crosby era.” If they went belly up last season, I must have missed it as they were celebrating their Championship, which came in the third “belly-up” season. In fact, if you wanted to make the reference, it would technically be going belly-up in two of four years, as it is tough to categorize coming up two wins short of a Cup in 08-09 as a failure.

Ladewski goes on to point out how the Penguins’ draft failings are comparable to those of the Pirates and compares Marc Andre Fleury, who was selected number 1 overall in 2003 to that of Bryan Bullington, one of many failed Pirate number 1s.

Pure and simple, like the Pirates over the years, the Penguins have made mistakes in the draft and the open market. Lots of them.

For instance, take the 2003 draft, in which the Penguins owned the No. 1 pick on the heels of a anorexic 65-point season. (Yes, Bubba, they were dog breath themselves not that long ago.) The golden rule states that you never, ever select a goaltender at the No. 1 pick, but the Penguins chose Marc-Andre Fleury, anyway. Here are some of players that they could have taken instead — Eric Staal, Thomas Vanek, Jeff Carter, Zach Parise, Ryan Getzlaf, Mike Richards, Corey Perry, Shea Weber . . .

Hey, maybe Bryan Bullington wasn’t that bad, after all. Sorry, forget I wrote that.

Sorry Paul, we can’t forget that you wrote it… luckily Penguins’ management forgot that you aren’t supposed to draft goalies first overall.

Someone should remind Ladewski that the Buccos passed on the likes of BJ Upton, Zach Greinke, Prince Fielder, Scott Kazmir, Cole Hamels, Matt Cain and countless others who have had an impact in the Major Leagues that season. Each and every one of those players would be an upgrade over those guys patrolling the bank over on the North Shore.

All Marc Andre Fleury has done since he was drafted is win 148 regular season games, 38 playoff games, post 20 shutouts (4 in the playoffs), and win a Stanley Cup. Bust city if you ask me.

Ladewski goes on to bash the Penguins system as not having produced a 30 goal scoring winger, even though they have been blessed with a bevy of top five picks…

Here it is, five years after Crosby was drafted, and the guy still doesn’t have a regular linemate that is in the same zip code as his talent level. Quick — name the last legit 30-goal-scorer to be developed in the Penguins farm system.

I have an answer: Evgeni Malkin.

Sure, he isn’t often used on the wing, but he did find a way to eek into an Art Ross Trophy two seasons ago and was in the race until the final moments of the 08-09 season as well. The team also drafted Jordan Staal who scored 29 goals as a 18-year-old and has developed into one of the best defensive forwards in the league.

Yes the team does need to find a way to upgrade itself on the wings, but Paulie neglects to mention that while they were missing out on top wingers, they were selecting stars in Malkin, Staal, Brooks Orpik and several others who were all instrumental in winning a Championship — something that our Buccos haven’t done since I was 4 years old.

Now don’t get me wrong, this isn’t a piece bashing the Pittsburgh Pirates. I respect what Neil Huntington is trying to do over there, but his hands are largely tied by the same man that clearly had his hand up Ladewski’s backside when yesterday’s piece was written.

I realize that Paulie doesn’t want to meet the same fate as his predecessor, but get real my man. Trying to convince folks that the Pirates wouldn’t be better off with a new owner is complete folly. I am thinking that he realized that himself, thus prompting the removal of the piece.

Was losing to the eighth seeded Canadiens disappointing? Sure… was it 17 years worth of disappointment? Not even close…

Here is a link to the cached version of the Pirate Report piece. As I said on Twitter… you can’t hide on the Internet.

Pirate Report: Like Bucs, Penguins still have work to be done