Dan Scifo is back with his weekly FTP Penguins column… this week he takes a look at the amazing feats of Sidney Crosby. 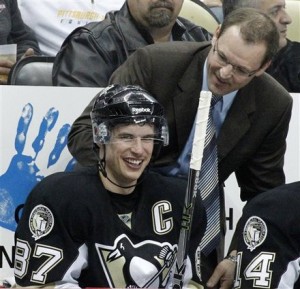 Pittsburgh Penguins’ head coach Dan Bylsma was at a loss for words to describe his superstar captain.

Just when you think Sidney Crosby can’t possibly outdo himself, he continues to raise the bar and provide hockey fans in Pittsburgh and throughout the National Hockey League with a continuous loop of jaw-dropping, breathtaking moments on the ice.

It’s like the ultra-competitive Crosby is locked into a never-ending game of “can you top this?” with himself.

Such was the case again Thursday night at the Consol Energy Center where the Penguins’ captain maintained his recent torrid pace.

Crosby extended his league-best 14-game point-scoring streak, notched his second straight hat trick at home, took the lead in the NHL points race and forged a tie in the goal-scoring battle during the Penguins’ 3-2 victory over the Atlanta Thrashers.

“Some of the goals that we saw, I wish I could help you out with a better adjective to describe them,” Bylsma said. “I shouldn’t be surprised, but I did shake my head a couple times.”
Bylsma wasn’t alone on Thursday night.

Crosby, who tied Tampa Bay’s Steven Stamkos for the league lead in goals, scored his 19th, 20th, and 21st of the season against Atlanta and now holds a four-point edge over the Lightning superstar in the scoring race.

If Crosby remains healthy and continues his scoring binge, Stamkos, or anybody else in the league for that matter, might not be able to catch the Penguins’ captain.

Crosby has 15 goals and 14 assists – good for 29 points – during his recent NHL-best 14-game point-scoring streak, extended on his opening goal early in the first period.

“This is probably the best I’ve seen him play in his career,” Penguins’ defenseman Brooks Orpik said.
The Penguins’ superstar helped his team improve to 10-0-1 in its last 11 games and snap a red-hot Atlanta squad’s winning streak at six games. Thrashers’ coach Craig Ramsay wasn’t shocked with Crosby’s play.

“Nothing he does surprises me,” Ramsay said. “That boy is a special player.

“When players like that get on a roll, it’s scary to play against them.”

Atlanta found this out first hand on Thursday night. The Thrashers took an early 1-0 lead, but Crosby helped the Penguins storm back as he recorded the next three goals for the first natural hat trick of his six-year career.

Crosby settled a cross-ice pass from winger Chris Kunitz before flipping the puck over the outstretched arms of Thrashers’ goaltender Ondrej Pavelec for his 19th of the season.

Crosby struck again early in the second, this time on a breakaway.

Penguins’ forward Aaron Asham found Crosby coming off the bench during a line change and the star forward took care of the rest after taking the lead pass.

Crosby, with nobody around him, slowly skated into the zone and tossed a soft backhander between Pavelec’s pads to put the Penguins ahead.

Crosby’s third goal was one only he, and possibly very few others in the NHL, might be able to pull off.
The Penguins’ captain, skating near the bottom of the circle, deftly turned as he deflected Orpik’s shot from the point past Pavelec.

“That’s as good a tip as you’ll see,” Orpik said. “I think it was going about a foot wide and you could tell by the reaction of their goalie that he was pretty surprised it went on net.”

Crosby doesn’t appear to be overly surprised or wrapped up in his recent stretch of dominant play.

“It’s nice to see them go in,” Crosby said. “Sometimes you play well and they don’t, so you want to make the most of the chances you get.”

The scary thing about Crosby’s overall game is that it doesn’t just consist of his offensive output.

“Points aside, his defensive game is probably as good as it’s ever been and his faceoffs have been huge,” Orpik said.

Bylsma also sees the little things Crosby does on the ice.

“He tracks back and pushes the play into our defense before they can get into the offensive zone,” Bylsma said.

Still, Crosby’s worth will likely be measured in offensive output and, with 29 points in 14 games, he doesn’t look to be showing signs of slowing down anytime soon.

“The points and the goals are obvious,” Orpik said. “He’s something special.”