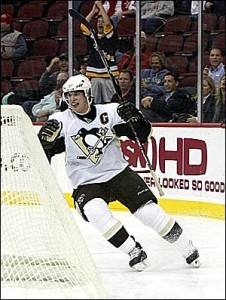 Sidney Crosby has been named the National Hockey League’s third star of the week for period ending November 28th. The week saw the Penguins captain take over the league’s lead in scoring with 7 points (4G-3A), as he helped the Birds to a perfect 4-0 during the week. Crosby’s week also included the 200th goal of his NHL career, which came as part of a hat trick this past Saturday against the Calgary Flames.

The first and second stars of the week went to the Atlanta Thrashers’ Ondrej Pavelec and Dustin Byfuglien respectively.

Here is the official release from the league…

Pavelec stopped 97 of 99 shots in backstopping the Thrashers (12-9-3) to three consecutive home victories as the Southeast Division’s hottest club extended its winning streak to five games. Pavelec began the week by turning aside 32 of 33 shots in a 5-1 victory over the Detroit Red Wings on Nov. 24. He made 25 saves for his fourth career NHL shutout as the Thrashers defeated the Montreal Canadiens 3-0 Nov. 26 and posted a season-high 40 saves in a 4-1 victory over the Boston Bruins Nov. 28. Pavelec lowered his season goals-against average to 1.62 and improved his save percentage to .949, placing third among NHL goaltenders in both categories. The 23-year-old Kladno, Czech Republic native, who returned to action Oct. 30 after being sidelined for three weeks following a fainting spell and subsequent concussion on opening night, has surrendered just three goals during the Thrashers’ five-game winning streak.

Byfuglien played a key role in the Thrashers’ surge last week by leading all defensemen in scoring with six points (two goals, four assists), including his League-leading fifth game-winning goal of the season. Byfuglien notched one goal in the victory over the Red Wings, posted one assist and a +2 rating in shutting out the Canadiens and scored the game-winning goal plus three assists and a +2 rating in the win over the Bruins. Returning to his preferred spot on the blueline this season, his first in Atlanta, Byfuglien leads all NHL defensemen in goals (nine) and points (25) in 24 games.

Crosby climbed to first place in the NHL scoring race by recording seven points (four goals, three assists), helping the Penguins (15-8-2) post four consecutive victories and close within two points of first-place Philadelphia in the Atlantic Division. Crosby tallied one goal and one assist in a 3-2 win over the Florida Panthers Nov. 22, earned one assist each in victories over the Buffalo Sabres (1-0, Nov. 24) and Ottawa Senators (2-1, Nov. 26) and recorded a hat trick, including the 200th goal of his NHL career, in a 4-1 win over the Calgary Flames Nov. 27. Crosby increased his season points total to 40 (18 goals, 22 assists), one more than Steven Stamkos of the Tampa Bay Lightning (21-18–39). Crosby shares second place among League goal-scorers behind Stamkos’ 21.