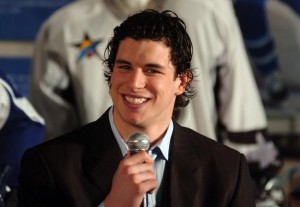 Finally the Cros has come back!

I had to borrow from Dwayne Johnson — “The Rock,” as he is known in the WWE, as it seemed like the most appropriate way to announce the return of Sidney Crosby.

Crosby, who has been out since January with a concussion and related symptoms, will finally make his return to the Penguins line-up tomorrow evening when the Penguins face-off against the New York Islanders.

The Penguins’ captain met with doctors earlier Sunday and was cleared for a full return to game action, something that has been speculated about for the last couple of weeks.

“He has been progressing and getting closer,” head coach Dan Bylsma said during a conference call this afternoon. “That’s been happening over the course of the last week-and-a-half or so. But really, until he went and saw Dr. (Michael) Collins in conjunction with Dr. (Charles) Burke – they saw him today and talked to him and cleared him, and that’s when the decision was made that (Monday) would be the day.”

As expected, Crosby will skate on a line with Pascal Dupuis and Chris Kunitz, his usual line-mates. James Neal will remain with Evgeni Malkin and Jordan Staal will continue on a line with Matt Cooke and Tyler Kennedy.

“That’s a line he’s played a lot with and has the most experience with on our team,” Bylsma said. “It will be starting that way with Sidney.”

Though Crosby has been skating with the team and has been cleared for contact for over a month, the coaching staff will monitor his minutes. They don’t want to throw him back into his usual 20-plus minute routine. Crosby has looked great during practices and Bylsma described his performance during those sessions as being amongst the best on the team. All of that aside, it is going to come down to getting Crosby acclimated to playing within a system again and getting him used to game speed.

“He is the best player on the ice [at practice] with his speed and the way he plays the game,” Bylsma said. “So he’s going to bring that into the game tomorrow. It’s going to take some time. And sometimes Game 1 is on adrenaline, and it takes a few games for players to get that back, get the timing back and to get the sense of the speed of the game.”

Bylsma doesn’t seem to think that there will be a let down in his team’s play, as they have all been playing within the system and have been effective in doing so. Having so many veterans bought in and on the same page should keep the team from letting out the collective exhale that sometimes happens after getting a star player back in the fold. The team is also confident that there will not be any sitting around and watching Crosby, as they have all gotten plenty of time to see him working in practice.

If anyone is a little overwhelmed by the situation it could be Crosby, who Bylsma described as sounding like a guy who is close to playing in his first NHL game.

“The only thing I can really say is that is that I would liken it to the sound you hear in the voice of a player that’s going to go play in their first National Hockey League game,” Bylma said. “He’s excited. He’s anxious. He’s been wanting to play hockey for a long time.”

The evening should be an exciting one for all involved… the players, the coaches, Crosby and most of all… the fans. The Consol Energy Center is sure to be an insane locale tomorrow night as the face of a team and a league will take the ice for the first time in over ten months.

We will be there bringing you all of the action… keep it here and on twitter for updates throughout the day and during the game tomorrow night.