Pittsburgh is no stranger to big time comebacks, but Sidney Crosby’s seems a bit more special than some of the others…

Sidney Crosby’s comeback is finally upon us, as he will skate in his first game in almost a year this evening against the New York Islanders. The interesting thing is that this comeback isn’t without precedent here in Pittsburgh…in fact, when it comes to the Penguins it was something of the norm during Mario Lemieux’s time in the league. I remember being in the crowd at the Civic Arena with my “Mario’s Back” sign, the nervous anticipation building as we all waited for the “big guy” to make yet another triumphant return.

Though we have lived this moment on numerous occasions, this one seems a little more special. That isn’t to diminish any of Mario’s comebacks, as they were all magnificent, especially his return on the final day of cancer treatments and his run to the Art Ross trophy, but this one is different.

Maybe it is that, honestly speaking, we got a bit spoiled with Mario and always sort of knew in the back of our minds that he would come back and be great. Maybe it has to do with the fact that Crosby was playing on a completely different plain last season before his concussion. Maybe it is the fact that Crosby’s absence was so magnified by social media and that the rumors that came with that magnification led to more fear of his never being able to return to the same level.  Maybe it is just that this has been such a special collection of talent and they haven’t been on the ice together – minus three games – in well over a year. 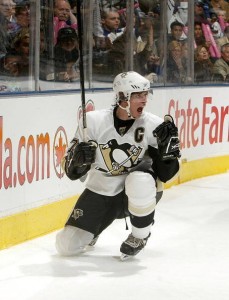 Whatever the reason, this one is pretty damn special and that point is further rammed home by the fact that the entire hockey world has again descended on Pittsburgh to cover it. There are reports that the team has issued upwards of 250 press credentials this evening, which is complete insanity for a regular season game.

The situation might have been frustrating for all involved, but the team handled this the way it needed too. There was no room for error in this recovery and all involved ensured that ll of it was handled the correct way. Crosby IS the Penguins at this point. He is the key to their marketing strategy, he is the focal point on the ice and he is a big reason why 18,087-plus citizens of earth spend their hard earned cash to fill the posh Consol Energy Center to capacity 41 wintery nights per year.

He also serves those same purposes for a league that was in need of a fresh face when he arrived. Sure, a case can now be made that Crosby has peers in selling the game, but for a time he was the complete and total face of the league – still is to a pretty big extent as evidenced by the coverage his return as garnered.

Most of what he does on the ice can only be described as magical and his skills are the best tools he could have as a salesman of the game. However, his personality and the fact that he knows how to handle all that comes with sitting on the mantle of one of the biggest professional sports leagues in North America only adds to his toolchest.

Crosby is a once in a generation talent that many thought might have been the latest casualty of post concussion syndrome. He has seemingly wandered into the haze that is PCS and has come out ready for action. The Kid that has spent the past six years selling the game has now sold that game on the proper handling of concussions.

The Kid devoted the same attention to detail and preparation that he typically puts into his game to his recovery process. Teammates have said that he is almost as well versed on the subject as a doctor would be. His efforts to follow care plans, to seek out additional specialists and leave some finger prints on the handling of concussions and head shots in general cannot be taken lightly.

It all adds to the special moment that we are all about to experience when the teams hit the ice this evening at the Consol Energy Center.

It doesn’t matter if you are one of the 250 covering the game as a credentialed media member, watching it as a rabid hockey fan from your seat in the arena, sitting at home or in a local watering hole watching on TV… all involved will remember this special moment… the moment Sidney Crosby came back…