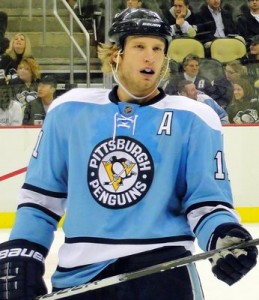 Now that the dust has settled on what was an exciting first round it is high time that we break down some of the moves that were made. Obviously, you all know the moves, but I’ll run through them anyway.

The evening started with Ray Shero shipping Jordan Staal to the Carolina Hurricanes in exchange for Brandon Sutter, Brian Dumoulin and the 8th overall selection, which was used to select Derrick Pouliot, who was considered to be one of the best skaters in this draft.

He wasn’t done there, as he then left the building the way he came, by making a trade. Zbynek Michalek was sent back to the Phoenix Coyotes in exchange for Harrison Ruopp, goalie Marc Cheverie and a 3rd round selection this afternoon.

Let’s start with the Staal/Sutter deal.

Ray Shero did not “want” to trade Jordan Staal and he said so again last night, however it was very clear that Jordan was ready to move on and he was prepared to allow that to happen once he began to receive a couple of aggressive offers.

The most aggressive came from Jim Rutherford, which shouldn’t surprise anyone, since we all knew of Staal’s desire to play with his brother Eric. It is also worth noting that this is apparently something that the Staal family as a whole had been hoping for.

Shero did an amazing job of getting great value for his asset in light of the fact that the Hurricanes knew that Staal wanted to join them. He got back Brandon Sutter, who was Carolina’s first round selection, 11th overall back in 2007.

Over a four year NHL career, Sutter has become one of the best two-way forwards in the game, with focus on the defensive side of those responsibilities. That doesn’t mean that he can’t score some goals, as he potted a career high 21 during the 09-10 season. Sadly, his production was hurt a bit by being miscast in a top six role based on the roster construction in Carolina over the past couple of seasons.

This is a perfect situation for the player and the Penguins as they have a player who is very comfortable playing a checking role, killing penalties and deferring to the Crosbys and Malkins of the world, who will be slotted ahead of him on the depth chart.

Sutter has notched 107-points (53G-54A), registered a plus-8, launched 541 shots on goal and has 64 PIMs over 286 NHL games. He all but matched Staal’s face-off winning percentage last season as well.

For Staal, he gets what he wanted – a chance to be in a position of prominence, playing in all of the big situations and doing so with his brother.

Though Sutter was the marquee chip in the deal from Shero’s standpoint, the team is very excited to get their hands on defenseman Brian Dumoulin. Dumoulin is an offensive, playmaking defenseman who has opened many eyes since arriving at Boston College. He won a National Championship as a freshman, while emerging as one of the top collegiate level rearguards. Both Shero and Rutherford talked about the fact that he is a near consensus pick to have an effective NHL career.

Derrick Pouliot completed the haul when the Penguins selected him with the 8th overall selection. Pouliot was one of the best skaters in the draft and he is tailor made for the Penguins, who love smooth skating puck movers.

A native of Estevan, Saskatchewan, Pouliot is teammates with Penguins’ 2011 first-round draft pick, Joe Morrow. The two spent time this season playing together on the Winterhawks’ power play. During the postseason, Pouliot placed second among all WHL defensemen with 17 points (3G-14A) in 22 postseason games as Portland lost to the Edmonton Oil Kings in the WHL Final.

Dumoulin and Pouliot each give the Penguins two more valuable assets on the blue line and we all know that Ray Shero loves having that cupboard stocked so that he can use those pieces to fill other needs. Look no further than Ryan Whitney and Alex Goligoski to see this philosophy in action.

The 22nd overall was also used to ensure that the defensive pantry stays stocked as the Birds selected Olli Maatta from the London Knights. He was the no. 8 ranked North American skater alongside Penguins 2011 2nd round draft pick Scott Harrington.

He can shoot and pass with the best of them and his strong play was key to the Knights run to the Memorial Cup championship game. They didn’t come away with the victory, but they saw Maatta emerge as an offensive threat. He tied for the team lead in playoff scoring with 23-points in 17 games. His 17 assists led the team.

Last but not least, the Penguins shipped Zbynek Michalek back to the Phoenix Coyotes in exchange for even more organizational depth. They bolstered their goaltending ranks by grabbing the 6’3”, 183lb Marc Cheverie, added another defenseman in Harrison Ruopp and a third round pick, which they used to select Oskar Sundqvist, a 6’3” center out of Skelleftea Jr. in Sweden.

Cheverie possesses a large frame, which covers the net effectively. He is an athletic guy with above average quickness and good reflexes. He challenges shooters and is aggressive in the net. He is a strong positional goaltender according to scouting reports.

Ruopp is a 6’2”, 198 pound bruiser, who plays a stay at home game. Shero admitted that they were interested in selecting him last year in the second round, but opted out once Scott Harrington was there for them. Ruopp isn’t afraid to drop the gloves and can play the role of enforcer on the ice. He is a work in progress, but some believe he has an NHL future.

Oh and at the end of the evening, Shero also cleared himself $14,666,667 of cap space which immediately has the world talking about his jumping in on Zach Parise, Shea Weber and every other big name free agent. There is also talk circulating that he may be trying to work a deal for Keith Yandle.

Stay tuned for details and quotes on all of the above…