Dan Scifo takes a look at the defensive shortcomings of the Penguins that led to one of their worst losses of the season Wednesday night. 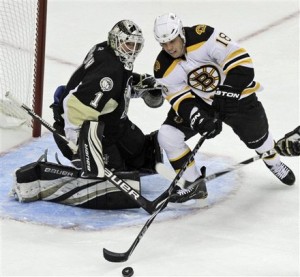 It appears like the Pittsburgh Penguins have more problems than just struggling goaltender Marc-Andre Fleury and an inconsistent power play.

Defense was the main culprit Wednesday night as the Penguins couldn’t protect a two-goal lead in the final 20 minutes, allowing Boston to score four third-period goals and an empty-netter during a 7-4 meltdown at the Consol Energy Center.

“When you’re up by two goals at home, you want to make sure you put it away,” Penguins’ captain Sidney Crosby said. “I think we have to have a bit of a killer instinct to go after them in the third.”

That killer instinct might have been the biggest problem on Wednesday.

The Penguins followed up two of their best periods of the season with quite possibly their worst as defensive lapses and turnovers led to odd-man rushes and goals, resulting in a disappointing loss.

“It’s not like we gave them a ton of chances, but the ones we gave up were big ones and they capitalized on all of them,” Crosby said. “We got into playing some risky hockey and we paid for it.”

Crosby’s goal with the man advantage against Boston on Wednesday was anything but conventional after his attempted centering pass, while skating on a rush down the left side, hit off Boston defenseman Brad Stuart’s stick and trickled between goaltender Tim Thomas’ pads.

Additionally, the Penguins, with a chance to tie, looked dismal during a late third-period power play opportunity.

“We didn’t even execute and have any time in their zone,” defenseman Kris Letang said.

The Penguins suffered their sixth loss in eight games and are 2-5-1 during the stretch. They failed to carry momentum from Saturday’s come-from-behind shootout win at Phoenix and haven’t won consecutive games since reeling off four straight victories in mid-October.

“The standard that we want to play, and how we want to play, is managing the puck and the game,” Penguins’ head coach Dan Bylsma said. “We have not done that as well as we need to in situations where we have been up and this is not the first time we have had this situation.”

Truer words have never been spoken.

Flip a coin with this team. Their inconsistent play can be maddening.

At times, like Wednesday night’s third period, there doesn’t appear to be any defensive system, or at least one that allows the Penguins to lock down and shut out the opposition so they can protect a third-period lead.

“You have to expect that when you’re up by two goals, they’re going to push pretty hard in the third,” Crosby said after the loss to Boston.

“It’s a matter of being ready for that and at the same time not letting them push back and trying to keep the momentum.”

Or, in other words, the Penguins tried to finish off the Bruins offensively, rather than shut them down defensively.

Bylsma’s philosophy is a high-energy, wide-open, offensive scheme, with a focus on creating room for his superstar players by pressuring the puck and playing defense in the offensive zone. It’s a stark contrast from defensive-minded former coach Michel Therrien’s approach.

While it’s true that the mid-February coaching change from Therrien to Bylsma during the 2008-09 season helped propel the Penguins to a Stanley Cup, the team currently appears to be lacking a defensive identity.

Off-season acquisitions Paul Martin and Zbynek Michalek, who missed nine games because of injury, were expected to bolster the team’s defense after struggles during last year’s playoffs, but it hasn’t shown yet.

“I think we made some critical errors and critical reads in situations where we know the play to make, but we didn’t get those plays and we left our goaltender in a difficult spot,” Bylsma said Wednesday.

That seems to become a recurring theme as backup goaltender Brent Johnson has appeared to settle down after his sizzling 6-1-1 stretch, allowing 11 goals in his last two starts.

Maybe it’s not Johnson’s fault. It might not be Fleury’s fault this whole time either.

Whatever the case, whether it’s goaltending, defense, the power play, or lack of scoring wingers, there is more than one problem the Penguins need to address before they can snap out of this current funk.

It doesn’t get any easier against an ultra-talented Tampa Bay tonight and Atlanta Saturday night before home games next week against the New York Rangers, Vancouver, and Carolina.

“It’s a small step back and it’s definitely frustrating,” forward Aaron Asham said. “We’re not worried; it’s just the way it goes. We have a good game and we have a bad game. We just have to start playing more consistent, sticking to our systems, and doing what we do well and we’ll be fine.”