Did we learn anything about the Penguins’ line combos moving forward from today’s victory over the Boston Bruins? 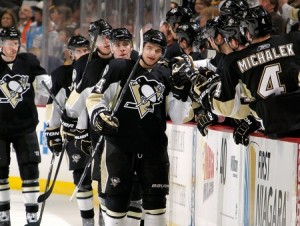 The Penguins and Bruins played a spirited game on Sunday afternoon on a national television stage, but the most interesting thing about it was the way that Penguins’ head coach Dan Bylsma entered the laboratory to experiment with a handful of different line combinations.

Though he downplayed it after the game telling me that he just wanted to get ensure that his team had a physical edge in the offensive zone that was able to pressure the Bruins defensemen, it still seemed as if he was doing some forward thinking when mixing his combos up this afternoon.

Sure, a case could be made that he was doing that to get the likes of Evgeni Malkin and James Neal away from defenders such as Zdeno Chara and Dennis Seidenberg and giving Eric Tangradi a chance to show off his new physical edge, but it could also be his way of taking a hard look at how he can configure his line-up later this week when he adds another bullet to the chamber in the form of Sidney Crosby.

He spent a significant part of the first period trying different variations of his top-two lines and each had some effective moments. He shuffled Steve Sullivan, Chris Kunitz and Eric Tangradi throughout his line-up, with the only constant being that Malkin and Neal were never separated.

Both Sullivan and Tangradi took shifts on the left wing with the top unit and found success, as chances were generated and the team’s second goal, scored by Matt Niskanen, came with Tangradi banging around in the right wing corner and going to the net.

Chris Kunitz spent time skating with Jordan Staal and Pascal Dupuis giving the staff a look at how that unit would fare if it was employed moving forward. He eventually slid back into his regular spot alongside Malkin and Neal on the team’s top line scoring a goal and adding 4 shots.

All of it begs the question: What will the line-up look like come Thursday night when (or whenever) Crosby makes his long awaited return to the line-up?

Well, based on what we have seen here today, it is safe to assume that Bylsma is going to keep Malkin and Neal together and I think most out there would agree with that decision. It may be the only constant that we will see moving through the first few games that Crosby is back on the ice. Kunitz will certainly continue to log minutes there, but he may be on the move to another line.

It is also probably safe to assume that the staff will at least give a strong look at using Crosby alongside his old line-mate Pascal Dupuis, which obviously breaks up a very effective second line. Will it stick? Well that depends on how everyone performs.

They very well may go Crosby/Dupuis and Malkin/Neal while having Chris Kunitz serve as a sort of swing man playing on both units, swapping in and out with Sullivan. 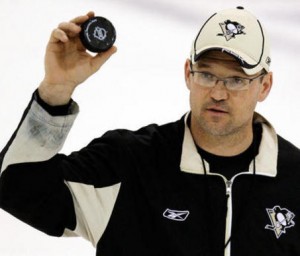 They could then put together a third unit that employs Staal, Sullivan when he isn’t skating on one of the top lines and Tyler Kennedy. It puts Kennedy in a comfortable situation in which he has previously be successful as well as opens up the door to having Matt Cooke reunite with a duo in which he has been quite successful himself.

The bottom line has more than a few bodies available to pick from, with Craig Adams, Arron Asham, Richard Park, and Joe Vitale all available and comfortable playing that role.

Things will also get a bit more interesting once Dustin Jeffrey works through his illness and is available to the team, as he has shown to be an effective winger and could be a candidate to play with the top couple of lines, at least in spot duty.

If I was forced to construct the line-up right now for Crosby’s first game back, it would look something like this:

This may not all sit very well with Jordan Staal, but based on the way the team is currently constructed, it may give them the best combination for success. They also have options in the form of Tangradi/Jeffrey who have shown an ability to play a number of different rolls to varying degrees of success. Could one of them catch fire and be a huge performer down the stretch and during the post season? Certainly…

The good news is that Dan Bylsma has already shown a willingness to tinker with his combos – Malkin/Neal aside – and will likely look like a circus juggler during this week’s full practice sessions in determining what will best work for the system.

We will be following the lines and combinations as the week rolls on… while we wait what would you guys do if you were fleshing out a line-up for Crosby’s return game?