The Pittsburgh Penguins – entering Saturday’s action – sit, not just high atop the Atlantic Division, not just the Eastern Conference, but the entire National Hockey League with 42 points, one ahead of hated cross-state rival Philadelphia.

But things weren’t always this promising for the Penguins, especially a month and a half ago when they started the season 6-7-1.

During most of October, and parts of November, doom and gloom surrounded the Penguins.

But all has apparently been forgotten thanks to the Penguins’ recent play.

The near-flawless stretch is now starting to take on additional historical significance. The 5-2 win against Toronto, the Penguins’ 11th straight and 13th without a loss, is the second-longest winning streak in team history.

Ironically, Pittsburgh also own the NHL record for the longest winning streak in a single season at 17 straight games from March 9 to April 10, 1993, which was also a year the Penguins won the Presidents’ Trophy for the NHL’s best record in the regular season.

Naturally, this run isn’t going to last forever and clearly the Penguins must play their best hockey in March, April, and throughout the playoffs – provided they qualify. But until then, I implore you to sit back and just enjoy the Penguins’ recent run of dominance. This kind of stretch hasn’t happened in 17 years.

The same can be said for Crosby’s play, which has been nothing short of spectacular — and some say Mario Lemieux-esque. 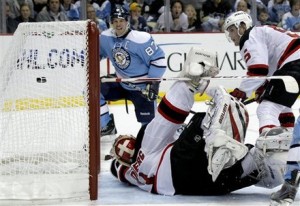 Crosby has helped vault the Penguins to the top thanks to his recent offensive onslaught. He has 35 points – 20 goals and 15 assists – during a league-high 17-game scoring streak. The superstar captain has scored 11 goals in his last six games and tallied at least one marker during 13 of his last 17 contests. The 17-game stretch is two games shy of Crosby’s career-high 19 straight games with at least a point.

“I appreciate it, don’t get me wrong, but I want to keep going.”

Penguin fans certainly appreciate it too as chants of “M-V-P,” “M-V-P” broke out during Wednesday’s victory over Toronto.

“It’s really nice and another example of the great fans we have here,” Crosby said.

Fleury has also rebounded nicely after enduring a miserable start to the season. The Penguins’ starting goaltender recorded one win, posted a 3.54 goals-against average, and a .853 save percentage in his first eight games.

Fleury bashers were out in full force and some even called for management to trade the beleaguered goaltender as backup Brent Johnson put up brilliant numbers in a relief role.

But Fleury has been stellar, winning a career-high 10 straight with a .945 save percentage and a 1.59 goals-against average since a Nov. 12 win at home against Tampa Bay

Of course, Fleury has benefited from plenty of solid, consistent defensive play in front of him from the likes of free agent pickups Zbynek Michalek and Paul Martin along with Brooks Orpik, Kris Letang and others.

The Penguins have surrendered just 21 goals in their last 13 games – allowing two or fewer in 11 of those 13 games — for a goals-against average of 1.62.

Letang, who leads all defensemen and write-in candidates on the All-Star ballot, is also considered one of the top two-way defensemen in the league. Offensively, Letang ranks second among NHL blue liners with 21 assists and 26 points and fourth in the league with a plus-16 rating.

It’s just part of the many reasons why the Penguins are currently flying high atop the NHL.

The success of Crosby, Fleury, Letang, and the Penguin defense, all the way to recent solid play by forwards Chris Kunitz and Chris Conner has helped the team get to where it is right now.

Again, it won’t last forever, but until then, just sit back and enjoy the ride at the top.