Are the Penguins and Jaromir Jagr talking reconciliation? That certainly seems to be the case… 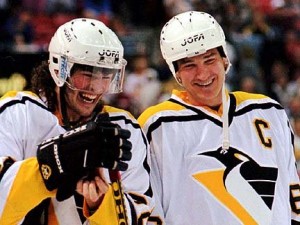 Everybody had a high school flame.

You know the one… He or she was there at the start. Made you feel things that you never felt before… Heck, maybe you felt them, but didn’t know what they were until that moment in time.

Maybe they grew with you, helped through some ups and downs… maybe you even thought you would be together forever?

Unfortunately, as is often the case, the magic of that first flame fades for one reason or another. You wanted different things… you just grew apart… or maybe you were “dying alive.”

Whatever the reason, it is a rare person (or team) that doesn’t think of that first flame and wonder “what if?”

What if things had gone differently? Where would we be today?

Well, the Pittsburgh Penguins had a high school flame and it burned pretty strong. It might not have been their first, as that flame is still burning in the form of all-time everything and team owner Mario Lemieux, but this one came pretty damn close to being as big a deal.

Jaromir Jagr was supposed to pick up where Lemieux left off. He stole the hearts of the Penguins’ faithful, the city of Pittsburgh and the National Hockey League. He wowed with his amazing skill, his goal-scoring prowess and the fact that he made those around him better… you know, sort of like the latest flame to steal this city’s heart, Sidney Crosby.

Though the kid from Kladno was winning scoring titles, carrying a team that was going into a cost saving mode, and becoming one of the best players in the league and probably the best European of all time, he wasn’t the happiest camper. He was famously “dying alive.”

The second best Penguin in the history of the franchise wanted to break up and the team was all too willing to accommodate him… as I said, they were heading into a cost saving mode. That break-up still stings to this day.

Sure we have all said what we were supposed to say…  “screw ‘em! You don’t want to be here, then get out…” But deep down we were all wondering… could it ever work again? Could the two sides recapture the magic of the first time?

Well, we are closer to finding out than ever before. According to reports, Jagr’s representative has reached out to a handful of NHL teams and the Penguins have been confirmed to be on that list. What’s stranger is that there hasn’t been an automatic denial as has been the case in the past when J2K’s name has come up.

The interesting thing about Jagr 2.0 is that he has spent three years in the KHL and has seemingly gotten over any ill feelings that he had been harboring about his time in Pittsburgh, in fact he has talked glowingly of the franchise, the city and Mario Lemieux. He has also put together a handful of pretty amazing performances on the world stage. He was probably the Czech Republic’s best player during the Olympics last year prior to being injured by a huge hit by Alex Ovechkin. He was again one of his country’s best this spring during the World Championships.

Jagr would also fill a huge hole in the Penguins line-up at right wing. The team is not blessed with a ton of depth in the department and Jagr’s scoring touch and ability on the short-wall would be a welcome addition. That ability would help five-on-five and even more so on the power play.

Bringing Jagr back into the fold sounds like a great idea for all involved, but is still a ways away. There are many issues to content with before it could become a reality, the biggest of which would be salary and fitting his in. You would also have to gauge the room to a certain extent, could he fit? From what friends in New York say, that answer is yes.

So with all of that in the hands of Ray Shero, there is another big question lingering – could you all deal with “Double J, Triple Excitement” donning a Penguins jersey again?

Personally I have always been on board with bringing him back into the Penguins family by raising his number 68 to the rafters…why not let him play one more year in the new barn before doing so?

Give us your thoughts…