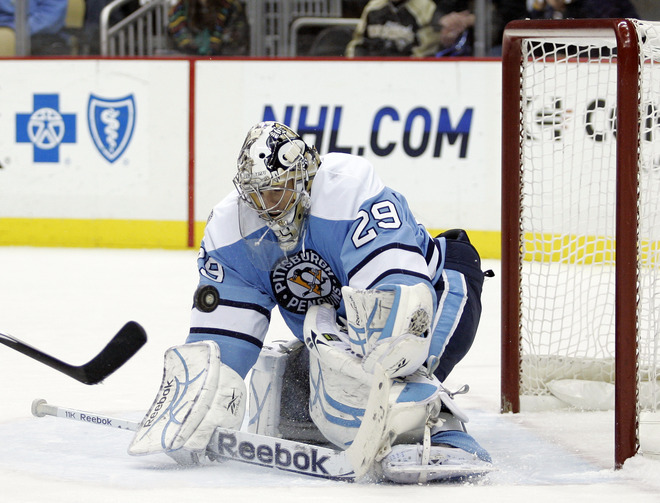 PITTSBURGH – Goaltender Marc-Andre Fleury was named the Pittsburgh Penguins’ most valuable player prior to Sunday’s game against the Florida Panthers.

He followed it up by delivering an award-winning performance worthy of his MVP status.

Fleury stopped 37 shots against the Panthers, including two shootout attempts, while Alexei Kovalev scored the deciding goal as the Penguins set a National Hockey League record, winning their fourth straight game via shootout, 2-1, Sunday afternoon at the Consol Energy Center in Pittsburgh.

“I think there’s no question he’s our team MVP,” Penguins head coach Dan Bylsma said of Fleury. “I’m not sure he’s ever been this consistent for this long a period of time.

“Given our injury situation and the year we’ve had, he’s been the backbone of our team and the guy that’s given our team the confidence to play strong defensively.”

The Penguins, who have only scored two regulation goals in three games, have won six of their last seven, including three straight. They clinched a playoff berth Saturday night after Carolina’s loss to Tampa Bay.

Fleury has been a big reason why the Penguins, playing without injured stars Sidney Crosby and Evgeni Malkin, are just two points from the Philadelphia Flyers for first place in not only the Atlantic Division, but also the Eastern Conference.

The Penguins, currently in a stretch of five games in eight days, meet the Flyers 7 p.m. Tuesday at the Consol Energy Center.

“It’s going to be a battle for the conference,” said Kovalev, who scored the game-winner in the shootout after he beat Florida goaltender Scott Clemmensen with a slick backhand-to-forehand move.

Fleury has given the Penguins an opportunity to catch the Flyers.

“This is by far the most consistent I have ever seen him,” said defenseman Brooks Orpik, who returned after missing 13 games with a broken finger.

“It’s great for his confidence, especially after the start he had when everybody was trying to run him out of town.”

Fleury broke a team record, set during the 2006-07 season by Jocelyn Thibault, for consecutive minutes without allowing a goal at 150 minutes and 14 seconds before Ryan Carter put the Panthers on the board in the second period.

“We’re on a good streak right now,” Fleury said. “Guys have been playing hard in front of me, blocking shots and helping me out a lot.”

Fleury made 19 saves in a 2-1 shootout victory over the Flyers on Thursday and followed it up the next night by stopping 21 shots and all three shootout attempts in a 1-0 win against New Jersey.

“We’re missing two superstars, two of the best players in the world, and he’s been the reason why we haven’t missed a beat.”

The Penguins were sluggish out of the gate against Florida, but Fleury was the difference.

Fleury made two key right-pad saves five minutes into the game and another sliding stop during a two-on-one to prevent the Panthers from taking an early lead.

A glove save early in the second and a one-time stop near the post kept the game scoreless, but the Panthers were finally able to crack Fleury late in the second when Carter deflected Alexander Sulzer’s shot from the point behind the Penguins’ goaltender.

That was the only time the Panthers solved Fleury.

Lovejoy tied it 2:17 later when he snuck a shot over the shoulder of Panthers’ goaltender Thomas Vokoun, who left the game at the start of overtime because of a back injury.

The Panthers nearly took the lead on a late second-period surge, but again Fleury was there.

Fleury made an initial save from point-blank range on Niclas Bergfors and sharp glove save on the follow-up by Stephen Weiss.

The Penguins took over in the shootout, a place where they have excelled recently with a 6-2 mark.

Fleury poke-checked the puck off Mike Santorelli’s stick and stopped Bergfors with a pad save, while Kovalev notched the eventual game-winner. James Neal, who scored the game-winner in a shootout against Detroit, sealed it on Sunday when he blasted a wrist shot behind Clemmensen.

“We’ve gotten some wins (via shootout) and that’s OK,” Fleury said. “It doesn’t matter as long as we get the two points.”

Notes: Crosby, who missed his 35th straight game with a concussion, skated for 45 minutes on Sunday morning… Center Mark Letestu also skated on Sunday and is probable for Tuesday’s game against Philadelphia… The Penguins are now 13-1-5 in one-goal games without Crosby… The Penguins tied a franchise record by playing in their fourth straight shootout (and set NHL record by winning four straight shoot out games)… Forward Max Talbot briefly left the game with an undisclosed injury, but later returned and was stopped by Vokoun on a partial breakaway… The Penguins wore their powder blue alternate uniforms for the final time this season, finishing with an 8-2 mark…Florida was recently eliminated from the playoffs for an NHL-record 10th straight year… Pittsburgh defeated the Panthers for the fifth straight time at home.

**In addition to his work here, Dan Scifo is the Assistant Sports Editor for the Latrobe Bulletin