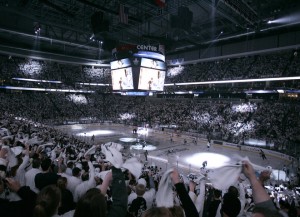 PITTSBURGH — The Pittsburgh Penguins might not have superstar centers Sidney Crosby and Evgeni Malkin to offset Tampa Bay’s stable of explosive forwards, but they still have goaltender Marc-Andre Fleury. And he was the ultimate equalizer Wednesday night.

“All game long, right from the start, the crowd was really loud and I think that’s something we fought for all season, to get home-ice advantage,” said Fleury, who is one shutout shy of tying Tom Barrasso’s franchise mark. “I think we showed why it’s so important to get it.”

“The building was awesome,” said head coach Dan Bylsma, who surpassed Scotty Bowman to became the Penguins‘ all-time franchise leader with 24 postseason wins.“The game…the atmosphere was the playoffs, for sure.”

The Penguins, playing without Crosby (concussion) and Malkin (knee) for the second half of the season, relied on Fleury and a rock-solid defensive system to stave off No. 5 Tampa Bay and earn the No. 4 seed
and home-ice advantage in the first-round of the playoffs.

The Lightning, making their first playoff appearance since 2007, couldn’t get anything going offensively in Game 1 despite finishing the regular season third in the conference with 247 goals.

“Going into the playoffs, we didn’t want to change anything because we know they have a lot of guys that are skilled and can score,” said Penguins’ defenseman Zbynek Michalek. “We don’t have the firepower, so the most important thing is to play good defensively.”

Steven Stamkos and Martin St. Louis, who finished second in goals and points, respectively, combined for just two shots, while Vincent Lecavalier, a former No. 1 overall pick who has 14 points in his last 11 games, had several quality chances denied by Fleury.

“Our guys did a good job staying within the confines of playing defense and trying to deny them the net,” Bylsma said.

The standing-room-only sellout crowd of 18,390 created a playoff atmosphere early as they christened the first playoff game in Consol Energy Center history with thunderous refrains of “Let’s Go Pens” before the teams took the ice.

Stamkos also underwent a baptism-by-fire of sorts 90 seconds into his first postseason game when Pens’ defenseman Brooks Orpik flattened Tampa Bay’s dynamic 21-year-old forward in a “welcome-to-the-playoffs” moment, turning him horizontal along the boards and drawing another loud roar from the crowd.

The new arena came unhinged with a deafening roar when Kovalev slid a one-timer behind Lightning goaltender Dwayne Roloson at 6:05 of the third period, and again 18 seconds later when Asham gave the Penguins a 2-0 lead. Chris Kunitz finished it off with an empty-netter in the final minute.

“Those guys stepped up and got some big goals when we were in a tight 0-0 game,” Bylsma said.

Fleury made sure the teams were deadlocked through two periods. He stopped 14 shots in the opening period, including one on St. Louis in a sitting position and an acrobatic save on former Penguin Ryan Malone where Fleury twisted his body to keep the puck from going into the net.

Lightning center Dominic Moore thought the puck crossed the line and raised his arms to celebrate, but Fleury somehow kept it out and denied Malone on the rebound, prompting chants of “Fleu-ry!” “Fleu-ry!” and “MVP!” “MVP!” from the capacity crowd.

“I was looking for the puck and the last second I thought it was behind me, but it worked out,” Fleury said. 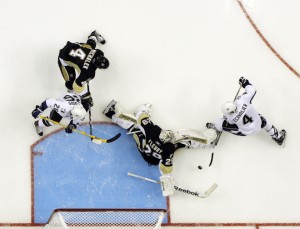 Fleury kept it scoreless early in the second during a Tampa Bay power play as he, first stopped Stamkos before making a falling blocker save on Lecavalier’s between-the-legs shot from the top of the crease.

“I was in hot water again, but I put my arm up and got a piece of it,” Fleury said.

Roloson, who made 37 saves, had his chance to shine during a Penguins’ power play in the second as he twice denied Jordan Staal in front and made another big save on Tyler Kennedy in the slot.

But the power play surge gave the Penguins momentum though as they recorded six shots during the key second-period man advantage and outshot the Lightning, 29-18, in the final two periods.

Kovalev, who was left alone in front of the net after taking a slash from Tampa Bay defenseman Pavel Kubina, one-timed a pass from forward James Neal at the point to give the Penguins a 1-0 lead.

“Luckily the puck was still in the zone,” Kovalev said. “I was wide open on the back door. I just tried to stay in front of the net and be patient.”

Seconds later, Asham put the Penguins ahead by two goals during an end-to-end rush down the right side. He missed an initial wraparound attempt, but converted the second try and flipped the puck behind Roloson.

“He came up with a big goal on a big shift after we got the first one,” Bylsma said. “You need that during the playoffs.”

NOTES: Crosby, who, on Tuesday, took part on a non-game day practice with the entire team for only the second time since being cleared to skate, watched the game from the press box. Crosby has missed 42 games and has not yet been cleared for contact…The Penguins entered the playoffs as the No. 4 seed for the third straight year… The Penguins have faced every team during the playoffs in the Eastern Conference except for Atlanta…Tampa Bay has scored four goals in their last four games against the Penguins, including a 2-1 victory on March 31…The Penguins entered the playoffs winning 12 of 16 and eight of 10, while Tampa Bay won seven of their final eight regular season games.

**In addition to his work here at From the Point, Dan Scifo is the Assistant Sports Editor of the Latrobe Bulletin.