Dan Scifo breaks down the Penguins lost opportunity against the Philadelphia Flyers last night at the Consol Energy Center.

PITTSBURGH — The Pittsburgh Penguins, playing without superstar forwards Sidney Crosby and Evgeni Malkin for the past 29 games, have used a tight, gritty, defensive style to pile up points and chase down the Atlantic Division-and Eastern Conference-leading Philadelphia Flyers.

They strayed from that defensive system during Tuesday night’s first-place showdown with the Flyers — a misstep that might have cost the Penguins the Atlantic Division title and the top overall seed in the Eastern Conference.

Scott Hartnell and Claude Giroux scored 47 seconds apart to give the Flyers a lead they would not relinquish as the Penguins missed out on a golden opportunity to pull even with their cross-state rivals in a 5-2 loss at Consol Energy Center.

“It felt like a wide open game…too much for our liking,” Penguins’ coach Dan Bylsma said. “We had our opportunities, but we weren’t able to get to our game.”

As a result, the Penguins are now four points behind the Flyers for the lead in the Eastern Conference and Atlantic Division with five games remaining.

“We didn’t have the outcome we wanted (Tuesday), but we’re going to keep battling,” Penguins’ defenseman Ben Lovejoy said. “We have five games left and if we win all five, we’re going to hope the Flyers stumble.”

Still, it was clear after Tuesday night’s loss that the Penguins have shifted their focus toward preparing for the upcoming Stanley Cup playoffs and Thursday’s game at Tampa Bay, an opponent they could see in the opening round.

The Flyers won just three times in 12 games played in Pittsburgh heading into the season, but that all changed when Consol Energy Center opened.

Philadelphia took all three games played in Pittsburgh this season as the Flyers not only spoiled the grand opening of the Pens’ new arena, but they may have also ruined their cross-state rivals’ chances at capturing the Atlantic Division and Eastern Conference titles.

“I’ve never celebrated winning the regular season,” Talbot said. “It’s not something you grow up and think about.

“You want to get ready to play good, playoff hockey and that’s what we’re going to do.” 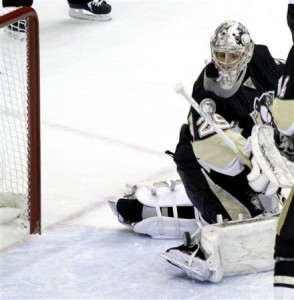 The Penguins, led by goaltender Marc-Andre Fleury, were playing a defensive, playoff-style of hockey the past several weeks. But Fleury, who posted a 6-2-1 record in March with a 1.83 goals-against average and a .930 save percentage, endured a difficult night Tuesday as pucks sometimes bounced off sticks, posts and bodies before making their way into the net.

“Certainly (Fleury) was not an issue in the game tonight,” Bylsma said. “We allowed it to get into a little bit of a skill game, which they have plenty of, and we took some costly penalties to put them on the power play and they capitalized.”

It was a stark contrast to the way the Penguins have played recently as they won their last four games via shootout, including a 2-1 victory in Philadelphia on Thursday. Pittsburgh also appeared sluggish offensively, putting up just 11 shots through two periods.

“I think we got away from our game,” Lovejoy said. “We’re a team that is difficult to play against and we tried to go chance-for-chance with a team that’s pretty good at playing that kind of hockey.”

The Penguins were the faster team at the outset, grabbing the early momentum with their physical play in a playoff-like atmosphere.

Alexei Kovalev rewarded the Penguins’ start with a 1-0 lead after he froze Bobrovsky with a blocker-side wrist shot during a two-on-one. It was his first goal in Pittsburgh as a Penguin since 2003.

The Flyers responded just as a minor penalty to Penguins defenseman Matt Niskanen expired.
Carter got a stick on Braydon Coburn’s shot from the point, which hit the post and bounced off Fleury’s right leg and into the net to tie the game.

The Penguins struggled through the first half of the second period, posting just one shot on goal. But Tyler Kennedy gave his team some much-needed life, and a 2-1 lead,after a wrist shot snuck under Bobrovsky’s pads.

Chris Kunitz nearly put the Penguins ahead by two goals, but Bobrovsky’s desperation dive across the crease kept it a one-goal game. 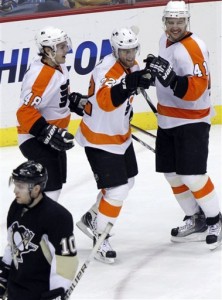 “At that point, we felt momentum was on our side,” Bylsma said. “There was a lot of good energy in the building and 3-1 would’ve been a nice lead to have, but shortly after the game changed.”

The Flyers to took advantage of a Paul Martin interference call and tied the game with a power-play goal.

Hartnell, after a taking a pass from Leino, circled from the goal line and snapped a shot over Fleury’s shoulder. Giroux gave the Flyers a 3-2 lead 47 seconds later when he put a harmless-looking wrist shot past Fleury from between the circles.

The first one, five minutes into the third, deflected off of Leino’s body and behind Fleury while the second, from the top of the crease, climbed up and over the shoulder of the Penguin goaltender.

“We shot ourselves in the foot,” Lovejoy said. “We gave them far too many chances and that’s a team with skill.

“They’re going to capitalize whether they have nice goals or fluke goals.”

NOTES: The Penguins have scored just three times in their last 59 power play opportunities…Niskanen has taken a minor penalty in six straight games…Center Mark Letestu returned from an undisclosed upper body injury…The Flyers last swept the Penguins in Pittsburgh during the 1983-84 season… Giroux has five goals in six games against the Penguins this season… The Penguins haven’t won a game this season when trailing after two periods.